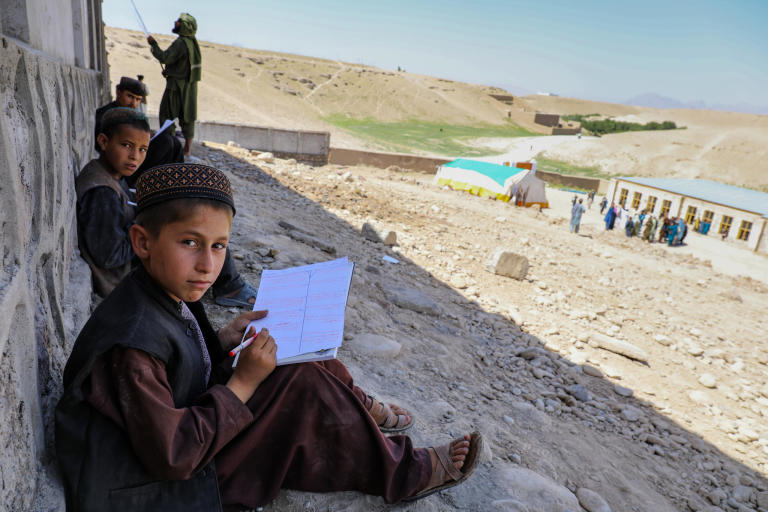 TEXT: Roald Høvring PHOTO: Enayatullah Azad Published 08. Sep 2019
Afghanistan Education
Read caption A WORKING BREAK. Ahmed has brought out his notebook in the break. He and his classmates have no time to lose. They need to catch up on several years of lost schooling. The repair work on the school in Charamgar is not finished, and students and teachers are improvising to make the best of a difficult situation.
Ahmed, 11, is lucky. He is no longer among the 3.7 million Afghan children who are out of school.

Children are the key to Afghanistan’s future but are increasingly a casualty of the conflict. Despite tremendous gains in rebuilding the public education system – particularly for girls – over the last two decades, the number of children out of school is on the rise for the first time since 2002. An estimated 3.7 million boys and girls – nearly half of all school-aged children – are out of school.

AFGHANISTAN/Uruzgan: There is a short break between classes. Ahmed, 11, and a couple of his classmates have sat down to work on their lessons. They have lost several years of schooling. Now that they are finally back in school, they have no time to lose.

We are in Charamgar, about five kilometres north of Tirin Kot in southern Afghanistan. In 2015, Ahmed’s school was occupied and used as a checkpoint by the Taliban. When the Taliban were finally pushed back and school resumed, the students and teachers returned to nothing more than an empty shell. All of the roofing, windows and doors had been either destroyed or stolen.

New hope for peace and a brighter future

About 300 students and a few dozen teachers have crammed into the least damaged parts of the building and are doing their best to keep the school going.

This spring, the Norwegian Refugee Council (NRC) stepped forward and carried out some basic repair work on this and three other schools in the same area.

In 2018, NRC ensured that 80,500 children and young people could receive an education in Afghanistan.

Due to the tense security situation, we have chosen not to use Ahmed or the other children’s real names. Now their smiles have returned, and they are looking forward to finally being back at school. But there is fear hiding behind the smiles. The peace is fragile, and no one knows for sure whether the fighting will flare up or whether the school will again become part of the battlefield. By negotiating with the parties to the conflict and repairing the school, NRC has brought new hope for peace – and a brighter future.

NRC is the only NGO in the area

Among other things, NRC has provided new roofing, windows and doors, as well as gates and boundary walls around the school. NRC has also established a school-based protection committee for each school.

“We feel safer and more secure now after building the boundary walls and installing the gates. Now, we have a bigger school playground where the students can play and feel safe. The high and sturdy boundary walls also provide protection against any attacks or flying bullets,” explains Nida Mohammad, the headteacher of the school in Charamgar.

In Uruzgan, NRC is the only international organisation on the ground providing support and assistance to protect education.
TURYALAY SAHEEM, NRC’s education coordinator in Afghanistan

There is a great need for education funding, but resources are very limited.

“In Uruzgan Province, there are very few NGOs who are active, and they have little by way of resources or funding to support the rebuilding of schools and pay the teachers. NRC is the only international organisation on the ground providing support and assistance to protect education,” says Turyalay Saheem, NRC’s education coordinator in Afghanistan.

“Thousands of girls and boys would have studied here if there was enough funding to rebuild the school,” he says, exasperated.

Every day, hundreds of children are forced to flee their homes due to insecurity and violence in Afghanistan, thus interrupting their education. Many displaced children are unable to enrol in school due to lack of space or because they have trouble obtaining the necessary documentation – or because they need to work in order to provide for their families.

Read also the story: If you're a 13-year-old living in Afghanistan

A report published by NRC last year revealed that more than half of children didn’t feel safe at school. Twelve per cent of children had experienced attacks on their schools, and many had missed exams or periods of schooling because of attacks or threats from armed groups.

Uruzgan Province in the southern part of Afghanistan is one of the areas that is heavily contested by both parties to the conflict.

Schools, teachers and students are increasingly the target of attacks and intimidation. In 2018, approximately 700 schools were destroyed, damaged or occupied by armed groups or Afghan and international military forces, or were closed due to the conflict – leaving more than 325,000 children unable to attend school.

It is not uncommon to see schools being used as checkpoints and forward operating bases for armed forces. This worsens the security situation for civilians and results in major damage to school buildings.
ANTHONY NEAL, NRC’s advocacy manager in Afghanistan

“It is not uncommon to see schools being used as checkpoints and forward operating bases for armed forces. This worsens the security situation for civilians and results in major damage to school buildings. As elections approach over the coming months, we expect even more attacks on schools – as many are used as polling centres. We have been advocating for the protection of education in Afghanistan for the past three years and we will continue to do so,” says Anthony Neal, NRC’s advocacy manager in Afghanistan.

“To be able to operate in Chora District, we had to negotiate with both parties. Now, we have gained both trust and acceptance, and have managed to gain humanitarian access to an area where relief workers previously struggled to reach out with help. That makes it all the more disappointing when there is no will or ability to fund our efforts,” says Anthony Neal.

Read more about NRC in Afghanistan

People we helped in Afghanistan in 2018