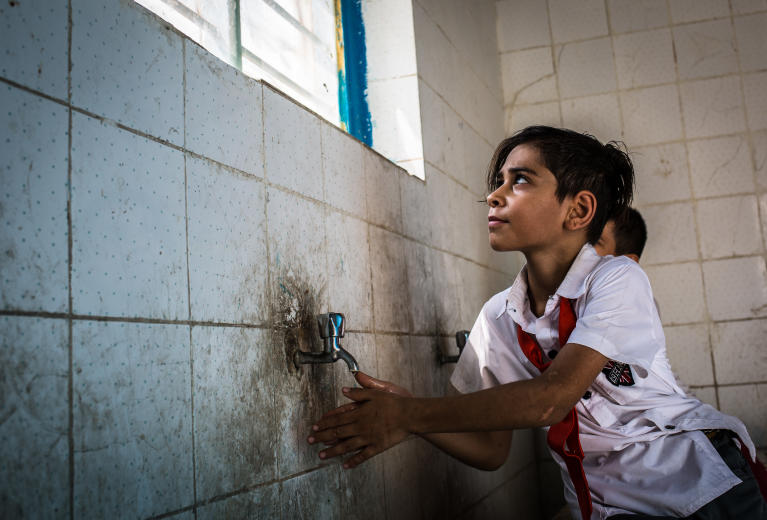 How NRC makes a difference

Paul Ireland Published 20. Sep 2019
Global Iran Iraq Somalia Uganda Education Environment Water, sanitation and hygiene promotion (WASH)
Read caption A student washes his hands in Faihaa school in Basra old city, Iraq. In the summer of 2017, the water here ran for only two hours a day and was not suitable for consumption. Photo: Tom Peyre-Costa/NRC
“We had only one toilet for the whole school, and most of the time it wasn’t working,” recalls 14-year-old Seham Aziz. Her school is one of 12 in Basra, southern Iraq, that was upgraded with new toilets, taps and water tanks by the Norwegian Refugee Council (NRC) in 2018.

Seham is in her sixth grade of primary school. She described her school before the upgrade as insanitary: “It’s very difficult to learn in my school. Many of my friends don’t come to school because they got sick from the water. My brother got sick because he drank salty water and had to go to the hospital.”

Without enough safe water for drinking, cooking and personal hygiene, it’s hard for people to maintain good health and fight off illnesses. Without proper sanitation, water supplies can become contaminated and diseases can spread rapidly. In 2010, the UN declared access to safe water and sanitation a human right.

At NRC, we help displaced people to get access to safe water and sanitation, providing education on good hygiene practices where it is needed. We aim to save lives, prevent diseases and promote dignity.

In the summer of 2018, water contamination levels rocketed in the governorate of Basra and clean water became inaccessible to many households. The situation spiralled into what many considered to be Iraq’s worst health crisis in decades, with more than 100,000 people hospitalised for water-borne diseases.

Water and sanitation facilities in schools were a particular concern. Broken toilets and dry pipes coupled with overcrowded classrooms made schools breeding grounds for outbreaks, leading to higher rates of school dropout. Simply turning on the tap to wash your hands or get clean water to drink became a rarity.

Teachers and students told us they saw numerous cases of children hospitalised, suffering from diarrhoea, vomiting, rashes and scabies.

Seham recalls: “Last year, during the very hot summer and with the salty water we couldn’t even take showers. We did not finish the curriculum because everyone was sick.”

While the water crisis in Basra drew the world’s attention, very little action was taken. NRC saw a need to respond to southern Iraq’s emerging humanitarian crisis before things got worse.

We deployed our experts to Seham’s school and 11 others to install water tanks and rehabilitate taps and toilets. With the support of the Norwegian Ministry of Foreign Affairs (NMFA), we ensured that more than 21,000 students would have a safe and sanitary learning environment for years to come.

“Before, we could not go to the toilets – and if we had to, we would wash our hands with dirty water. Now the toilets are clean, we are not worried anymore,” Seham explains.

Seham is one of more than 2.4 million people around the world who benefited from our water, sanitation and hygiene programmes in 2018. Here are just a few of the ways we make a difference.

Without water, humans cannot survive. This simple biological fact lies at the heart of many humanitarian emergencies. When large numbers of displaced people arrive in a new place, the existing water supply systems often struggle to cope. And sometimes there are no systems at all…

In 2017, more than 3,000 Afghan refugees were living in Dasht-e-Zahmatkeshan, one of the largest informal settlements in Iran’s south-eastern Kerman province. This hub of 32 brick factories sits in a dry, arid landscape, 50 km away from the nearest city. Access to drinkable water was a daily struggle for residents.

Twenty of the brick factories already had wells, but the water was salty, muddy and unsafe to drink. Even the water bought in from visiting water tankers was sub-standard, and children often complained of stomach problems.

After assessing the area and consulting with the community, NRC’s experts installed 22 purifiers to improve the quality of the water. The water purifiers are now servicing nearly 500 families in the area.

“Since the water purifiers have been up and running here, we don’t have to drink salty water anymore,” explains local resident Pari Tajik, 19. “Now we can make tea with fresh drinking water.”

Good latrines and wastewater management are essential for maintaining hygiene and preventing disease. But the need for sanitation goes beyond public health concerns. The absence of functioning, safe and private toilets can be a particular problem for women and girls.

The Hamar Weyne market, in the heart of Somalia’s capital city Mogadishu, is extremely hectic. But until recently, the marketplace itself had been on the decline. Years of conflict and poverty had led to the facilities becoming shabby and neglected. Women struggled to find suitable toilet facilities and would often have to go home to use the bathroom, leaving their market stalls unattended.

To reverse this trend, NRC allocated grants to a group of women stallholders to establish six pay-as-you-go latrines. Once construction was completed in February 2017, the women hired attendants to manage customer service, cleaning rosters and maintenance. The new facilities have given the market a much-needed boost, and have even helped to improve the cleanliness of the marketplace as a whole as traders take more pride in keeping their stalls presentable.

“NRC is doing something that humanitarian agencies normally do not do,” explains market trader Halimo Dhoore. “Trying to understand what our biggest challenges are, we try to find solutions together. The latrines are one example.”

Safe water and sanitation demand good-quality facilities and infrastructure. But just as important are awareness and education. It's vital that residents understand the need for good hygiene and the factors that cause and prevent disease.

Selina Night, 28, and her nine children fled South Sudan in early 2017, following a flare-up of violence. On their journey over the border to Uganda they saw many people die as a result of water-borne diseases like cholera and diarrhoea. In the urgency of flight, basic hygiene was forgotten. “People used the same rivers to drink from, bathe, pass stool and provide for their animals,” Selina recalls.

Selina now lives with her children at the Bidibidi refugee settlement in north-west Uganda. Here, NRC has been conducting hygiene and sanitation awareness campaigns across the settlement every two weeks. Community members gather to share views and get clear messages on keeping their surroundings clean. NRC also supports hygiene in education by providing classroom lessons and supporting hygiene clubs.

“A clean latrine is important for hygiene …. Knowing how to plan my cleaning sessions helps me to include the activity in my normal routine,” says Selina.

In 2018 a total of 2,484,732 people benefited from our water, sanitation and hygiene promotion work, spread over 19 countries around the world.

Find out more about our water, sanitation and hygiene promotion work

How you can make a difference

Join us in supporting the 70.8 million people displaced by war and persecution worldwide. You can contribute to our work in the following ways:

For alternative ways to donate, or if you’re a US citizen looking to make a 100% tax-deductible donation, please see our Make a difference page.