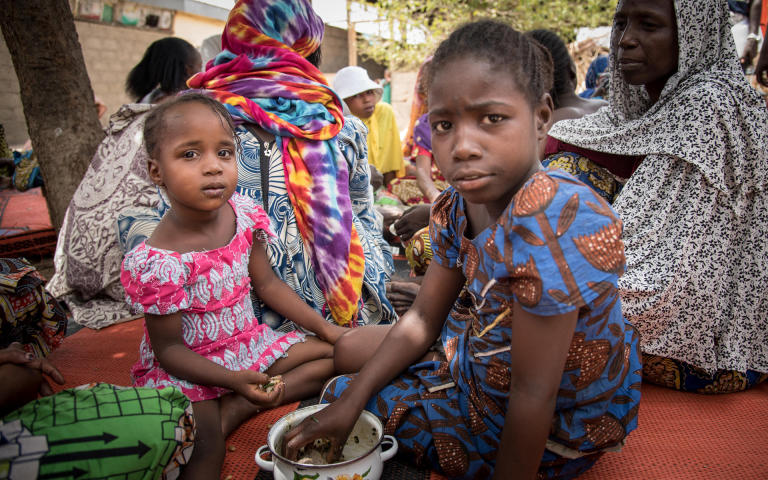 Itunu Kuku Published 06. Jun 2019
Cameroon Neglected conflicts War and conflict
Read caption Mariam Adoum, 4, and Aïcha Ali, 8, are having their meal. They belong to a group of families that have found safety outside Kourgui in Far North Cameroon after fleeing Boko Haram violence. More than 100,000 refugees from Nigeria have fled to Cameroon for safety, and about 250,000 Cameroonians are internally displaced because of ongoing violence in the region. Photo: Tiril Skarstein/NRC
Cameroon is a bilingual country in central Africa with a population of 24 million. It is a country of great natural beauty and cultural diversity, but these assets are unfortunately being undermined by a number of different humanitarian crises. The Norwegian Refugee Council (NRC) in Cameroon is currently providing a humanitarian response to three different emergencies within the country’s borders.

Here are five things you should know about Cameroon’s crises:

1. Trouble in the Far North

The havoc wreaked as a result of the armed conflict between non-state armed groups and security forces in the north of Nigeria has not been contained within that country’s borders. Incursions, cross-border raids and attacks within the neighbouring countries of Niger, Chad and Cameroon have been frequent. The conflict and resulting violence in these four countries has been referred to as the Lake Chad Basin Crisis. Of the four countries affected, Cameroon is the second hardest hit after Nigeria.

Since 2014, the Far North region of Cameroon has experienced several devastating attacks displacing a total of 262,831 Cameroonians as of May 2019. As the country struggles to deal with this unprecedented number of internally displaced citizens within its borders, it is simultaneously hosting over 136,000 Nigerian refugees who fled to Cameroon as a result of the same conflict.

Education has suffered greatly because of this crisis. Hundreds of schools have either been shut down or abandoned because of insecurity in the Far North region of Cameroon.

It is estimated that about 23,000 school-aged children are currently unable to attend school. Teachers have fled without returning, and most schools lack the basic equipment needed to host students.

3. On the brink of civil war

As Cameroon grapples with the situation in the Far North region, a brutal conflict is unfolding in a different part of the country. In the North-West and South-West regions, clashes between non-state armed groups and the Cameroonian military have displaced 530,000 people as of March 2019.

Armed groups are fighting for the independence of the country’s two English-speaking regions, while the Cameroonian military is leading a fierce crackdown against this secession movement. As is usually the case, civilians are bearing the brunt of the conflict and are fleeing their villages to escape the violence and widespread human rights violations being perpetrated by both sides.

The vast scale of this crisis and the lack of international attention to it are disheartening. Close to a million children are not attending school in the two affected regions. The need to scale up humanitarian action is urgent. Only 8 per cent of people identified as needing shelter have received any assistance in this respect and only 11 per cent of those needing household items have received them.

4. Trouble to the east

Cameroon is currently gripped by a third humanitarian crisis caused by the conflict in its neighbour to the east – the Central African Republic (CAR). In December 2012, civil war broke out in CAR. The armed groups involved agreed to a ceasefire in 2014; however, the scale of the humanitarian situation today is still staggering.

There are over 260,000 refugees from CAR currently living in Cameroon. About 50 per cent of them are spread across seven refugee camps in the East, Adamawa and North regions of the country. The other 50 per cent are living with host communities.

5. How we assist those affected

The Norwegian Refugee Council (NRC) is responding to each of these three crises in different ways.

In the Far North region of Cameroon, we are renovating classrooms so that children of both displaced and host communities can once again receive an education. Information, counselling and legal assistance is also being provided to affected populations in the Far North region. We help displaced families to obtain important documents such as birth certificates and marriage certificates. We also work to resolve any land and housing disputes that may arise between displaced and host communities, and advise displaced people on how to ensure their rights are respected as they reside in host communities.

In Cameroon’s North-West and South-West regions, we’re providing displaced communities with urgent assistance in the form of household items and shelter kits. These kits contain essential items for families that have fled with nothing but the shirts on their backs. As of April 2019, we have distributed 3,918 emergency kits, and we intend to scale up our distribution activities to reach more displaced people who are hiding in the bush.

In response to the crisis in the east of Cameroon, we are focusing on providing information, counselling and legal assistance to affected communities. This takes the form of civil documentation, land access, and conflict resolution for refugees from CAR in both Cameroon and CAR itself.