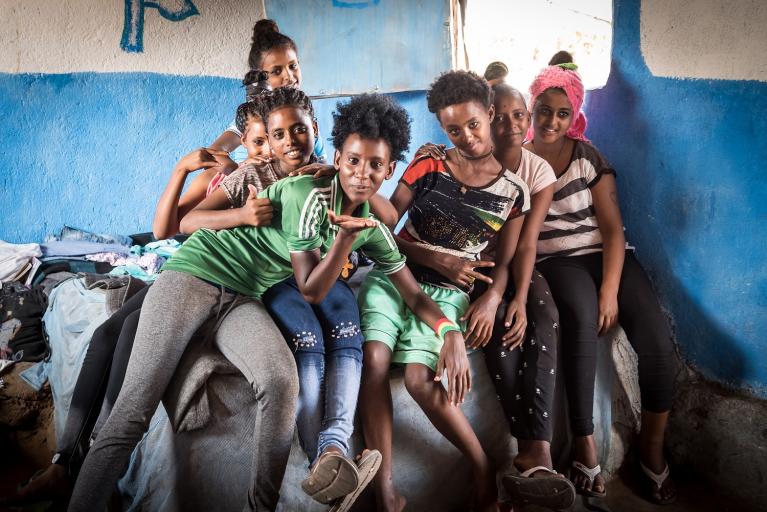 Sara Plassnig Published 06. Sep 2018 Edited 26. Jul 2018
Global Youth
Read caption Refugee youth living together in a house in a refugee camp in northern Ethiopia. Photo: Beate Simarud/NRC
Do you wonder what it feels like if you have to flee from everything you know and everyone you hold dear?

Eden, 20, from Eritrea, Hassan, 26, and Abdullah, 19, from Syria have sought refuge abroad. In their video blogs, they speak about how life is as a young refugee: What is it like for them to stay in a refugee camp? Where do they want to travel? Who are they in love with? What are their plans for the future?

Follow Hassan and Eden to learn more about refugee youth:

“
Hi, my name is Hassan. I am from Syria, but due to the war I am living as a refugee in Jordan. I would like to tell you about my life in Syria and how my life has changed after I was forced to flee. Follow my vlog!
Hassan, 26

“
Hi, my name is Eden. I'm 20 years old, and I have just graduated as a chef. One year ago, I fled from my home country, Eritrea. I fled because there is no future for youth there. There are hardly any jobs, we can't get an education, and we have little freedom. Now, I am living in a refugee camp in Ethiopia, but I have no plans of staying. I dream of owning a restaurant one day – preferably in Europe.
Eden, 20

2017 was one of the worst years in the seven-year Syria crisis and 2018 is on track to be equally devastating for civilians. Syria witnessed shocking rates of displacement, with 3.8 million people forced to flee because of intensified fighting between government and opposition forces. Across the region, Syrian refugees remain vulnerable and pressured to return to their war-torn country. The needs on the ground are increasing at an alarming rate, and aid agencies warn they will be unable to meet them.

Around 2.9 million people were internally displaced by violence in Syria in 2017 alone, with continued attacks on civilians and critical infrastructure like schools and hospitals. 7.3 million Syrians are living in communities reporting explosive hazards such as mines, unexploded or abandoned bombs, cluster munitions, grenades, and rockets shells.

Access to aid has been systematically compromised and denied by the warring parties inside Syria. This has deliberately harmed civilians and, in some cases, turned humanitarian workers into targets.

Across the region, 2.7 million Syrian children are still out of school. Millions of Syrians, inside and outside the country, lack legal documents and are not registered, which makes it difficult for them to access aid, education and employment.

At the same time, a report from Norwegian Refugee Council (NRC) and other aid organisations from February 2018 showed that hundreds of thousands of Syrians risk being forced to return. Many of them will have to return to unsafe, explosive-ridden and devastated neighbourhoods without basic services, or to where there is still active fighting. The majority of Syrian refugees in Lebanon and Jordan live below the poverty line. Their precarious situation might lead them to return to Syria before it is safe.

Decades of conflict and severe drought have adversely affected Eritrea's agriculture-based economy. The country is one of the least developed countries in the world.

For the last 17 years, the country’s economy has been dominated by a resource sapping "no war, no peace" situation with neighbouring Ethiopia, leading to increased military spending and a closed, heavily guarded border.

A growing number of young people opt to leave the country to escape poverty and the mandatory national service that can be lengthy and onerous. Some escape through dangerous migration routes and risk being trafficked or tortured for ransom. Those who leave without permission risk a long prison sentence if they return. All those who have not been released from national service are hiding in fear of being forcefully recruited into the military. Most of the young generation end up as refugees in Ethiopia and Sudan.

In a more positive development, Ethiopia announced in June 2018 that it will fully accept and implement the peace deal that ended its border war with Eritrea. Ethiopia’s acceptance of the ruling made by the 2002 border commission is an important step to better the relationship between the two countries.

Parts of Eritrea and Ethiopia are both covered by the Sahel region, where we find some of the poorest, most vulnerable countries in the world. Climate change and large flows of migrants and refugees cause great challenges in the area. In addition, organised crime, such as human trafficking and weapons smuggling, as well as worsening security, make it difficult to reach people in need.