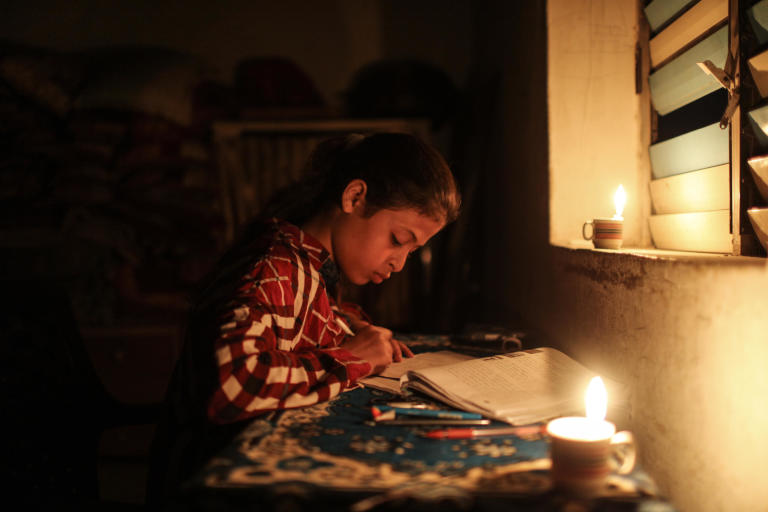 Brona Ni Uigin Published 07. Jun 2018
Palestine Children Education War and conflict
Read caption Omaia Ziara, 13, is doing her homework under candlelight during long power outage for 16 hours a day in her room in her family house in Al Shaaf neighbourhood in eastern Gaza Strip on September 26, 2017. Photo: Wissam Nassar/NRC
Nightmares, mental health issues and psychological deterioration are an all too common reality for the children of Gaza, writes Brona Ni Uigin of the Norwegian Refugee Council.

The Arabic phrase describing the outline of a heart is “behebek khawa”, which roughly translates as “your love is obligatory”. A heart-shaped doodle by 14-year-old Mohammad Ayoub has become a lasting reminder for his newly bereaved mother Raeda. The teenager was fatally shot by Israeli soldiers during the March of Return protests led by Palestinians living in Gaza that began on March 30.

The page from their son’s arts and crafts notebook captured his unyielding spirit, his mother and father explained. But it is also a page from the book of a young life marred by the reverberations of chronic conflict. Mohammad had been drawing his dreams and nightmares as part of a psychosocial support program provided by the Norwegian Refugee Council (NRC), which has reached 250,000 children in Gaza since 2012. His teachers told us he had made remarkable strides with his performance at school and overall wellbeing until the final, fateful encounter with Israeli forces.

Many young people of Gaza say the protests are a way of demonstrating their opposition to the Israeli occupation of Palestine, the debilitating blockade of Gaza and their right to return to their original homes, from which hundreds of thousands of Palestinians were expelled or fled in 1948 during the creation of Israel. Today seven out of 10 Palestinians in Gaza are registered as refugees and cannot return to their original homes.

While sharing a recent home video of Mohammad dancing in his living room, surrounded by his siblings and cousins, his family found it hard to believe that he was no longer with them. His untimely death left a strong imprint on the psyche of other young members of the family.

Since guests offering condolences have stopped visiting their home, the younger siblings have started to miss Mohammad more intensely. Although too young to fully comprehend the events leading to his death, they have developed an intrinsic reaction to the unexpected bereavement.

As a parent, she had seen her children experience both explicit and implicit violence. While mourning the loss of her son, she was also worried about the mental health of the remaining siblings.

Such a pervasive environment of violence has become an all too common reality for the children of Gaza. The latest spate of Israeli attacks in response to the protests has had most people in Gaza on a heightened pulse.

But children are bearing the brunt of the violence, with six out of 10 students that we surveyed reporting frequent nightmares, a visible sign of psychological deterioration. We spoke to 300 students and 20 principals in Gaza, who told us that the rate of nightmares has increased since violent reactions to the protests began.

Israel’s use of lethal force against protesters posing no immediate threat to life has received international criticism but with no accountability in sight. Since March 30, more than 100 Palestinian protesters in Gaza have been killed – more than 50 on one day today – and 9,800 injured. At least five children were killed and 530 injured, some maimed for life.

Mohammad’s case is a particularly horrific example of Israel’s collective punishment of Palestinians through multi-faceted violations of international humanitarian and human rights law. But generations of children in Gaza have also borne the long-term impact of cyclical violence and implicit harm when their family members, especially parents and guardians vested with their protection, are killed.

Fourteen-year old Reham is among them. As she sits next to her bandaged father, articulating her intentions and those of other young people in Gaza that are demanding “self-determination and rights”, it is not immediately evident that she has fought a long-haul battle against trauma.

It took Reham nearly three years to recover from the impact of the 2014 Gaza war that claimed more than 2,000 lives, injured more than 11,000 and devastated her community in Khan Younis. The experience of her father being shot in the leg during the latest protests has brought old psychological wounds to the fore.

“In my dream I saw my father on the ground, killed, and woke up screaming. I have had this dream more than once. We went there [to the protests] to claim our rights. We have no rights to electricity, to food, to play or to assistance,” Reham told us, highlighting the daily struggles that impede her performance at school.

Gaza’s children are distressed not only by wars but also by the economic and social deprivation that they and their families face due to Israel’s blockading policies. The humanitarian situation is worse than ever with 84 per cent of the population dependent on aid. More than 60 per cent of them are under 18 and feel disenchanted by their stifled futures.

It is clear that as long as security and stability remain ephemeral notions in Gaza, long-term psycho-social support will remain an uphill battle. As aptly described by the NRC’s secretary general Jan Egeland, an 11-year old girl in Gaza would have lived her entire life under blockade and seen three wars with mass losses of life and housing.

That same girl now faces the horrifying prospect of losing family and friends as many are killed and injured every week.

Such a perpetual state of constant fear violates the rights of any child, anywhere.

But while the realities within which we operate are constrained, our students remain unbridled in their aspirations. So as long as those like Reham continue to benefit from our services, we will continue our efforts and hopefully expand with the support of larger institutions.

Ultimately we hope that our core philosophies of establishing a sense of safety and stability among children, empowering them to improve their situations and mobilising social support will become an integral part of education for all Palestinian children.