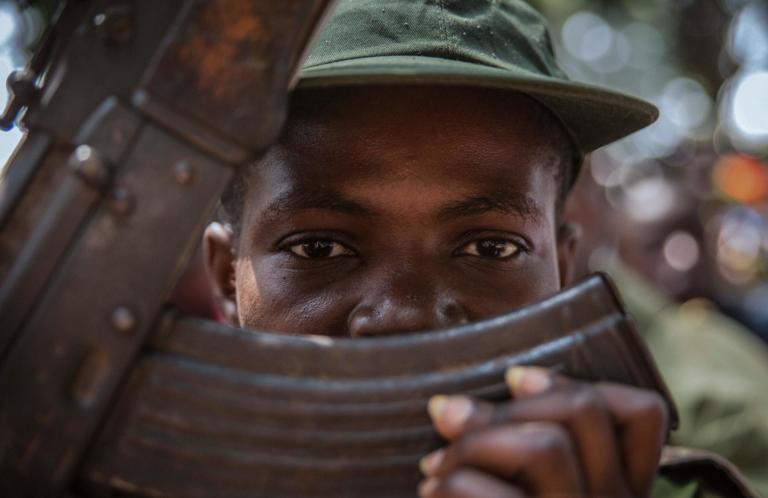 Ingvild Vetrhus Published 21. Aug 2018
South Sudan Education War and conflict
Read caption Over 19,000 children have been recruited by armed groups since South Sudan's bloody conflict broke out in 2013. Many of those who, today, get the opportunity to go to school, struggle with trauma. Photo: AFP PHOTO/Stefanie Glinski/Scanpix
Five years of bloody conflict is one of the main reasons why 2.2 million children are denied education in South Sudan, making it the global benchmark country for the highest rate of children out of school.

The world's youngest state has many opportunities. Since 2013, however, violence has caused havoc in South Sudan, leaving nearly half the county’s children deprived of their education and future opportunities.

If this continues, the country's development will come to a halt, and the children will be at risk of becoming a lost generation, the UN warns in a recent report.

The Norwegian Refugee Council (NRC) works around the clock to make sure that tens of thousands of children can go to school.

“Providing education in emergencies is important: it makes children feel safe, helps them focus on the future, and can protect them from abuse and the possibility of being voluntarily recruited to armed groups,” says John Rutaro who works for NRC in South Sudan.

How children are deprived of their education in South Sudan

A recent report by the UN and South Sudan’s Ministry of Education shows how children are at risk of being deprived of their education. Here are some of the main reasons:

• Girls: There are no recent nationwide statistics, however, figures from 2015 show that 75 per cent of girls in rural areas did not have access to education.

• Early marriage: Many girls are married off in return for money. There are no statistics covering the entire country, but a survey conducted in 2015 in UN protection camps in Juba shows that over 70 per cent of 604 married women and children were married when they were between the ages 15 and 19, while seven per cent were married under the age of 15.

• Schools lack resources: Several students risk dropping out of school due to the lack of resources and incomplete education cycles. Over 140,000 schoolchildren had to drop out in 2017 because their schools could not offer the grade they were to start. It is expected that this number will rise to over 160,000 in 2018.

• Displaced children: It is difficult for parents to enroll their children in education when they are displaced. Children account for around 60 per cent of South Sudan’s 1.9 million internally displaced people. Many children are staying in areas that are difficult to reach, and which host no schools.

• Street children: A multitude of children have become orphaned as a result of the conflict, and many have ended up on the street and fending for themselves. Meanwhile, some families struggle to feed their children, often as a result of conflict and poverty, and send the children out to find work.

Those who flee are mainly children

When South Sudan gained its independence from Sudan in 2011, its people could finally start to recover from Africa’s longest-running civil war. Only two years later, a new, violent conflict erupted, crushing the optimism of independence and leaving development on hold.

Today, the majority of civilians who flee the violence of armed groups are children. They often seek protection in areas that are particularly difficult for aid organisations to reach, and where there are no educational opportunities.

Meanwhile, hundreds of thousands of children have missed out on years of their primary schooling, and must catch up on lost time. The most recent statistics, from 2016, indicate that 90 per cent of students enrolled in primary education were overage for their grade level.

Young girls are married off

If you are a girl in South Sudan, you are likely to be deprived of your education. Many are married off in return for money.

“Girls are often excluded from education because of cultural barriers where, traditionally, girls are considered a source of wealth and domestic care. As such, they are groomed to be wives and caretakers at an early age. Education is therefore not considered important,” Rutaro says, emphasising the great importance of girls’ education.

Girls are often excluded from education because of cultural barriers where, traditionally, girls are considered a source of wealth and domestic care. As such, they are groomed to be wives and caretakers at an early age. Education is therefore not considered important.
John Rutaro works for NRC in South Sudan

“Education gives girls a voice. It can protect them from harmful cultural practices, early marriage and can change the society as a whole. It will also strengthen the country’s economy."

An educated girl is likely to increase her personal earning potential, as well as reduce poverty in her community. “The effects carry from one generation to the next as educated girls have fewer, healthier and better educated children,” says Rutaro.

South Sudan is one of the most neglected conflicts in the world. Read why here.

Child soldiers are going back to school

An estimated 19,000 children have been recruited by armed groups since the conflict began. As a child soldier, you have no access to education.

“Education can prevent children from being voluntarily recruited by armed groups or gangs.  Children out of school can be easily enticed to join in the fighting on the promise of a better life and livelihood, but also to escape the harsh economic conditions at home,” explains Rutaro.

“On the other hand, many of the children who are in school know their right to education and have hope of alternative sources of livelihoods other than the use of a gun.”

In recent years, many child soldiers have been disarmed and demobilised. In 2015, 6,280 former child soldiers were enrolled in primary school, and more have followed since. However, many are traumatised and struggle with concentration in class and adapting to a new way of life.

Providing education for tens of thousands of children

NRC currently works at 87 schools across the country. Last year we supported over 76,000 children and youth with receiving their education.

In 2014, just after the conflict broke out, we built Hope Primary School in a UN protection camp near the capital Juba, where thousands of displaced people are seeking safety.

Both adults and children of all ages are enrolled at Hope primary school. Many of the teachers are also displaced. We provide them with training and ensure that they are equipped to work as educators in a crisis situation. This way, we ensure that the students have a safe place to learn, where they can be children again.

"These children must get educated now so that they can become good leaders one day,” says head teacher James Kot Nyuon.

He points out that many of the students are struggling with trauma. Psychosocial support is, therefore, an important part of the school plan.

"We want to give the children hope for the future, and allow them to forget the past," says Rutaro. “We organise games and drawing groups, as well as debates and football competitions. This has worked very well.”

We work to make sure that girls and boys have the same opportunities. Our staff on the ground works to spread awareness about girls’ education in rural areas. This is done through community meetings in the UN protection areas and neighbouring communities.

Six-year-old Safari Rose is excited to be back at school. Her family had to flee when armed groups found their way to her neighbourhood in Juba. She’s one of the 3,500 children enrolled at Hope primary school.

"I will work hard at school. If I am able to finish, I want to help restore peace and build the country by building schools and hospitals," she says.

Safari is one of many children who has witnessed the brutality of the conflict. Her father was killed by armed groups, and her brother died as they sought safety. She is tired of the conflict.

"I miss my father and my brother. I really hope that peace will come to South Sudan.”

Through our programme "Education in Emergencies" we have supported around 76,000 people with their education across South Sudan. We: