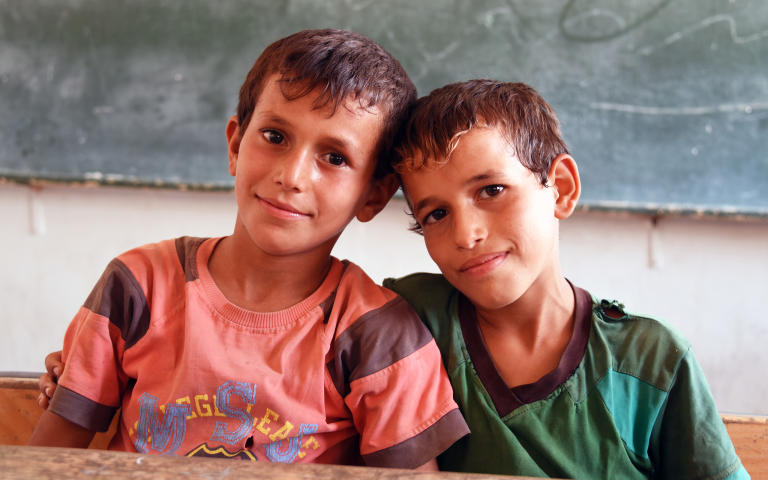 Samer Abu Rass and Thale Jensen Published 25. Oct 2017 Edited 13. Nov 2017
Syria Children Education Syria crisis Youth
Read caption Twelve-year-old Eid (left) and Ismail, 13. Photo: Karl Schembri/NRC.
At ages 12 and 13, brothers Eid and Ismail have not been in school for a whole year. They used to work in the streets of Aleppo.

The conflict in Syria has left many children and youth without an education. Most of them are too young to remember a life without war. Inside the country, 1.75 million children are currently out of school – and for those fortunate enough to be in the classroom, the risk of dropping out is quickly rising.

“We wanted to help our father, since he couldn’t work. In the end, he told us to stop working because it wasn’t good for us.”
Eid and Ismail

Eid and Ismail used to sell sweets in the streets, but they did not like it because it was very tiring.

In August 2017, the two brothers attended classes supported by the Norwegian refugee Council (NRC) where children who have missed out on education can catch up with their peers. Now, they can finally go back to school.

In Sahnaya, a city in southern Syria, south-west of Damascus, NRC runs summer schools in collaboration with the Ministry of Education. The pupils are children aged six to twelve who are out of school or at risk of dropping out.

More than 2,000 children and 150 teachers have participated in the summer schools. They provide a safe space for playing and learning, in addition to preparing the children on returning to school.

"All the children were going to school, why couldn't we go too? We need to study."
Eid and Ismail

Determined to catch up

Fatima, 14, was in the 6th grade when the Islamic State Group (IS) took over her city, Manbij (Aleppo) and prevented her and other children from going to school.

She had been out of school for four years when her family finally managed to escape and go to Damascus. Although she had forgotten most of what she had learnt, Fatima is determined to catch up on her lost education.

Forgot how to read and write

Sadiq has forgotten how to read and write since he fled Aleppo six years ago. Now, he is trying to catch up on years of lost education.

Sadiq has forgotten how to read and write since he fled Aleppo six years ago. Now, he is trying to catch up on years of lost education.

Being the family's breadwinner, Sadiq has to work from eight in the morning until six in the evening before going to the learning centre.

"My dad got older, and he couldn't work anymore, so I had to work.
Sadiq, 15 years old

Sidra, 14 and from Deir ez-Zor, was out of school for three years before she and her family managed to escape from the Islamic State group and go to Damascus. We are now helping her catch up on her lost education to become a lawyer.

Want to go back to school

Twelve-year-old Ibrahim was displaced from Raqqa, northern Syria, by the Islamic State group five years ago. He has not been to school since.

In Syria, the conditions inside schools and the quality of education have deteriorated drastically since the start of the war. One in four schools has been damaged or destroyed. More than 150,000 teachers have stopped teaching. In families where parents have lost their income, children have dropped out of school to work.

Ibrahim has been working in a car repair shop for the past five years. He attended the NRC-supported summer school in August 2017. Now he is determined to go back to school and achieve his dream of becoming a teacher.

“If I had stayed in school, I would’ve been in seventh or eighth grade now.”
Ibrahim, 12 years old

Never been to school

12-year-old Nisreen has never been to school because of violence and displacement from Aleppo. Thanks to catch-up classes she did last summer, she is excited to go to school for the first time in her life this month.

Qamar, 12 years old, fled Aleppo and arrived alone in Sahnaya in August 2017. His mother was killed by a sniper and his father abandoned him to find refuge in Lebanon.

“When the fighting started we stopped going to school. Planes bombed our houses and we had to escape.”
Qamar, 12 years old

"The IS group had taken over and they were killing everyone," he says.

"We couldn't go to school because of them. We felt relieved once we arrived here."

Qamar is now living in Sahnaya with his uncle and has been out of school for the last two years.

"What I like most about the summer school are the teachers," he says, adding: "School is very important, it's much better than working when you're a child."

Twenty-three-year-old Moussa is a medical student in Damascus and volunteers at the summer school, where he organises children’s games.

He left Idlib in northern Syria when the violence escalated two years ago.

“It was so dangerous,” he recalls. “Missiles attacked my area, so many people died. I left Aleppo and came to Damascus for safety.”
Moussa, 23 years old

"I love children. I like being around them, having fun."

Fourteen-year-old Amina, from eastern Ghouta, outside of Damascus, has been living in Jaramana in the outskirts of Damascus for the past four years. Her father disappeared three years ago. Amina's family was told that he had died.

“Rockets were falling next to our school and the parents stopped sending their children,” she says “I really loved going to school but then it became terrifying.”
Amina, 14 years old

She's been out of school for three years now. Back home, it became too dangerous to go to school, so she had to drop out.

children are out of school and 1.35 million are at risk of dropping out.

children between the ages six and 14 were assisted by NRC in 2016 across Syria.

attacks on schools have occurred since 2011.

schools were rehabilitated by NRC in 2016