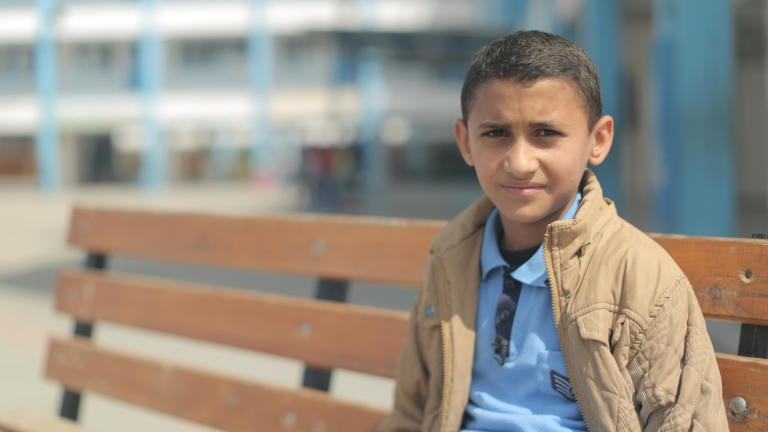 
If you are 10-year-old living in Gaza

Roald Høvring Published 07. Jun 2017
Palestine Children
Read caption GAZA. Rezq Ahmed, 10, from Al Mugragha, had his family house destroyed in the last war on Gaza in 2014. He is the oldest of three sisters and two brothers. 1.8 million Palestinians in Gaza are ‘locked in’, denied free access to the remainder of the occupied Palestinian territory and the outside world. Movement restrictions imposed by Israel since the early 1990’s and intensified in June 2007, have undermined the living conditions in Gaza and fragmented the oPt and its economic and social fabric. UN says could become uninhabitable by 2020. Photo: Ahmad Mashharawi/NRC.
If you are 10-year-old living in Gaza you would have already lived through three wars and lived your whole life in a blockade.

In the Gaza Strip, the blockade and recurrent rounds of hostilities have eroded families’ resilience. Children are growing up in a society permeated with restrictions, hardship, and the ongoing threat of a new escalation, leaving them with a deep sense of insecurity, fear and hopelessness. A recent UN study noted that in 2020 Gaza will be ‘unlivable’, largely as a result of Israel’s blockade and the ongoing wars.

Rezq Ahmed, 10, from Al Mugragha (picture above), had his family house destroyed in the last war on Gaza in 2014. He is the oldest of three sisters and two brothers.

“We live in a tragic situation under the blockade where our water and electricity are cut off. We only get electricity for three hours a day, so I can’t watch TV, and when we want to study at night, we can’t. I mainly study in the afternoon and a little bit in the evening”, says Ahmed Rezq.

• 1.8 million Palestinians in Gaza are ‘locked in’, denied free access to the remainder of the occupied Palestinian territory and the outside world.

• Movement restrictions imposed by Israel since the early 1990’s and intensified in June 2007, have undermined the living conditions in Gaza and fragmented the oPt and its economic and social fabric: Israel views these access restrictions as essential security measures addressing a range of serious threats to Israel’s population.

• In 2015, the Israeli authorities have significantly increased the number of exit permits issued to Palestinians; however, those eligible for such permits still constitute a small minority, primarily patients, business people and staff of international organizations.

• The isolation of Gaza has been exacerbated by restrictions imposed by the Egyptian authorities on its single passenger crossing, Rafah, which has remained largely closed, citing security concerns, since 24 October 2014, including for humanitarian assistance.

Children are also affected by high levels of violence in the home, at school and in the community, high unemployment, increased poverty, and increased negative coping mechanisms, including school dropout, child marriage and child labour.

“We hope the blockade will end and the environment remains clean and beautiful. What scares me the most is the shooting and the war. People become displaced and houses get razed to the ground. During the war, I was afraid of the shooting and of the Israelis. Whenever they would shoot, I would instantly get terrified”, says Ahmed.

The first time the shooting started in the last war was in Ramadan and Ahmed and his family were having their breakfast meal.

"Our house got bombed at night and we remained huddled in one place. We woke up in the morning and found the Israelis had broken into our place. When they entered, we sought a car and went to perform prayers. We stayed away from our home for one month”.

“
When the war was going on, I would try to calm down my two siblings down, read stories to them and play with them. I would tell them that there was nothing serious; it was just a man who was launching fireworks. I am responsible for my siblings because I am the oldest. I took care of them and ensured they didn’t get injured or harmed.
AHMED REZQ, 10-years old living in Gaza

You have lived your whole life under blockade. Gaza has been described as an open air prison, where 1.88 million Palestinians are living under blockade and denied free access to the remainder of the occupied Palestinian territory and the outside world.

7 out of 10 Palestinians in Gaza are refugees, many fled their villages in 1948. Two and a half years after the 2014 hostilities, 47,200 people are still displaced.You live in one of the world highest populated areas in the world, with 5,151 inhabitants per km2. The size of the Gaza strip is less than Oslo, but it has three times Oslo’s population. The population in the Gaza Strip is expected to grow to 2.1 million by 2020.

You have lived through three wars that have taken the lives of more than 3,800 Palestinians, of whom 770 were children. Most likely you have seen family members, relatives, friends or others being killed or seriously injured.

50% suffer from the psychological trauma

There is a 50 percent chance that you suffer from psychological trauma. 229,000 children require some form of mental health support or psychosocial intervention.

There is an 85 percent likelihood that you go to a school that runs double shifts because of the chronic shortage of facilities. The blockade prevent students from studying in the West Bank and abroad.

You live in a society with the highest rate of unemployment in the world. 42 percent of the working adults and 58 percent of the youth are unemployed.

60% are in need of humanitarian assistance

There is a 47% chance that you family is moderately to severely food insecure. In the Gaza Strip 830,000 people are in need of humanitarian health and nutrition interventions.

You have limited access to safe drinking water. Only 5% have portable piped water. 40% receive water only twice a week or less. 96% of the water is undrinkable. For recreation, you swim in a sea that has 90 million litres of untreated and partially treated sewage dumped into it each day.

If you are a girl there is an increased risk of early marriage. In Gaza, one in three women who were married in 2015 were below the age of eighteen.

The inaccessibility of 35 percent of Gaza’s farmland and 85 percent of its fishing waters.

66% are denied medical treatment outside Gaza

If you or your family need specialist medical treatment, such as complex heart surgery or treatment for some type of cancer, you must seek it elsewhere. You will need to apply for an exit permit and will most likely see your application denied or delayed by the Israeli authorities. There is a chance, like many before you, that you will die while waiting.

The World Health Organization reports that the approval rates for the exit of medical patients seeking treatment outside the Gaza Strip was as low as 44% in October 2016.