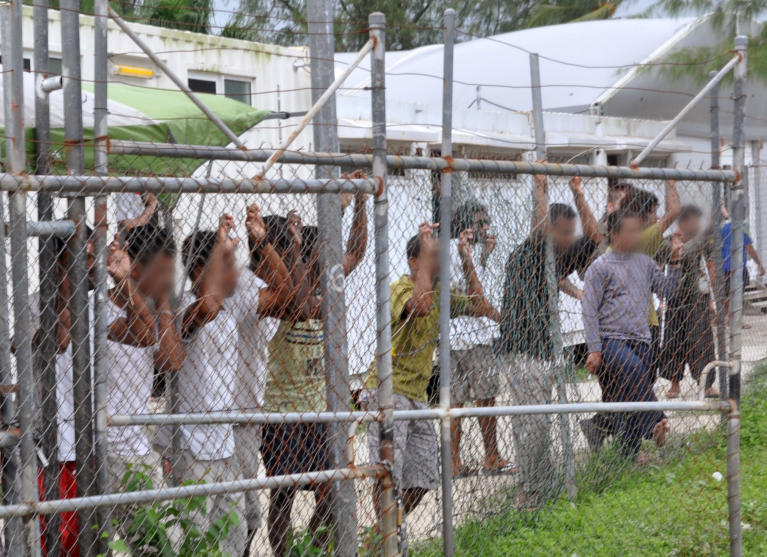 In a new report released on 3 August, Amnesty International and Human Rights Watch revealed the inhumane conditions of close to 1,500 asylum seekers sent from Australia to the two most controversial detention centres in the Pacific. The report revealed incidents of violence, child abuse, sexual abuse, inhumane treatment and miserable living conditions.
On 17 August, Papua New Guinea decided, after consulting with Australian authorities, to close the detention centre on the island of Manus.

For 15 years, Australia has sent several thousand asylum seekers to closed detention centres on Pacific islands. On 7 September, the Norwegian press revealed that the Norwegian Oil Fund is one of the biggest shareholders in the company running the centres.

15 years have passed since the Australian navy boarded the Norwegian cargo ship MS Tampa, which had picked up 438 refugees from Australian waters, and offloaded the refugees on the island of Nauru. Now the world's attention is once again on Australia's controversial refugee and asylum policies, which have been strongly criticised by the UN and human rights organisations. In September 2015, an editorial in the New York Times called them "brutal and inhumane".

In August 2001, the Norwegian cargo ship MS Tampa picked up 438 refugees (369 men, 26 women and 43 children), mostly Afghans, from Australian waters off Christmas Island, about 200 km off the coast from Australia. This led to hectic diplomatic activity between Australia, Norway and Indonesia, which only ended when the Australian navy boarded the ship and sent the refugees to the pacific island of Nauru.

In 2002, the captain of MS Tampa, Arne Rinnan, and his crew were awarded the UNHCR Nansen Refugee Award.

Even though Australia has not experienced the same influx of refugees and migrants as Europe, the country's refugee and asylum policies have been high on the political agenda for several years. Ahead of the election in September 2013, the two main political parties, Labour and the Liberals, both pledged to tighten up the refugee and asylum politics. The Liberal Party, led by Tony Abbott, won the duel against Labour. One of Abbott's most used slogans during the election campaign was: "stop the boats", alluding to the increasing number of boat refugees arriving in Australia.

According to Australian authorities, 7,300 people tried to enter the country illegally in 2011and in 2012, this figure increased to 18,000. After the new centre-right government took office, the Operation Sovereign Borders was launched to protect Australia's borders. The military effort to stop boats with asylum seekers quickly resulted in a decrease in numbers of people trying to reach Australia by sea. During the first 100 days, the number dropped by more than 80 per cent.

The government's argumentation behind launching the operation was that the boat journey was dangerous and controlled by criminal gangs. Many boat refugees arrived in Australia via Indonesia and the majority of the refugees came from Myanmar, Sri Lanka, Afghanistan, Iran and Iraq. Australian authorities faced strong criticism after having towed boats with refugees back into Indonesian waters and several boats were forced back to Sri Lanka.

Refugees as source of income

One important element of Australia's restrictive policies is to send asylum seekers to other countries in the region, where they are placed in camps. The asylum seekers are sent to Papua New Guinea and Nauru. Both islands receive much needed money to take on the task.

After the 2001 Tampa episode, the Pacific islands discovered that refugees could become a source of income. Australia sent all the refugees from the Tampa to the small island of Nauru together with a 10 million dollar check. Since then, several islands have been willing to welcome the refugees Australia does not want.

Being the largest of the Pacific island states and close to Australia, Papua New Guinea seized the opportunity in 2013, when the country made a deal with Australia to receive asylum seekers who come to Australia without a visa and obtain refugee status. If they do not obtain a refugee status in Australia, they will be sent back to the country they travelled from, to a third country, or stay in a refugee reception centre for an undecided period of time. The conditions in these centres, which are located on the Papua New Guinean island of Manus, have been strongly criticised. Now, the Papua New Guinean government has decided to close them.

The UN Refugee Agency (UNHCR) has for a long time expressed concern for these refugees, especially children, unaccompanied minors and torture survivors. UNHCR claims that Australia has a shared responsibility with Papua New Guinea for the refugees' legal protection – including finding solutions for refugees also in Australia.

The leaked reports published by The Guardian on 16 August 2016 confirm that the criticism made by UN and several human rights organisations about violence, abuse and sexual abuse of minor and adult asylum seekers is justified.

The countries hosting the asylum centres are not unaffected by the criticism. In March 2016, the Papua New Guinean Prime Minister Peter O'Neill stated that receiving all the asylum seekers in Papua New Guinea has also hurt the country's reputation. The basis for the government's decision to close the centre on Manus was that the Supreme Court in April 2016 ruled that conditions in the detention centres conflicted with the constitution.

Australian authorities have been clear about that none of those who have stayed in the centres in Papua New Guinea or in Nauru will be granted residence in Australia. The government also states that boat refugees are "jumping the queue", since they are not among the quota refugees selected by UNHCR to be relocated in another country.

For a long period of time, Australia has been generous when it comes to receiving quota refugees, and it refers to this when it is criticised about not receiving individual asylum seekers arriving by boat. Some critics of Europe's handling of the refugee crisis have used Australia as an example, pointing out that Australia has not been found in breach of any international conventions despite the fact that they have practised the same policies for years.

Still, it is not right to say that the Australian refugee policies do not violate the Refugee Convention, although the country has not been found in breach of it. Unlike other international conventions, the Refugee Convention does not have an international court ensuring that the convention is followed. In addition, Australia and Oceania do not have a regional court equivalent of the European Court of Human Rights. If a European country had copied Australian politics, there is a likely chance that the country would have been found in breach of article three in the European Convention on Human Rights.

There are already examples of the EU and European countries being inspired by the Australian model. The deal between EU and Turkey stipulates that boat refugees arriving Greece from Turkey will be sent back to Turkey and given protection there. Although this arrangement is not as far-reaching as the one in Australia, there are several similarities. Defenders of the agreement argue that it contains guarantees from Turkey that asylum seekers will receive proper protection and asylum processing. Still, there are many indications which suggest that the agreement will be appealed to the European Court of Human Rights and that it will be the Court which has the last word.

(RICHARD SKRETTEBERG AND EIRIK CHRISTOPHERSEN are senior advisers in NRC)