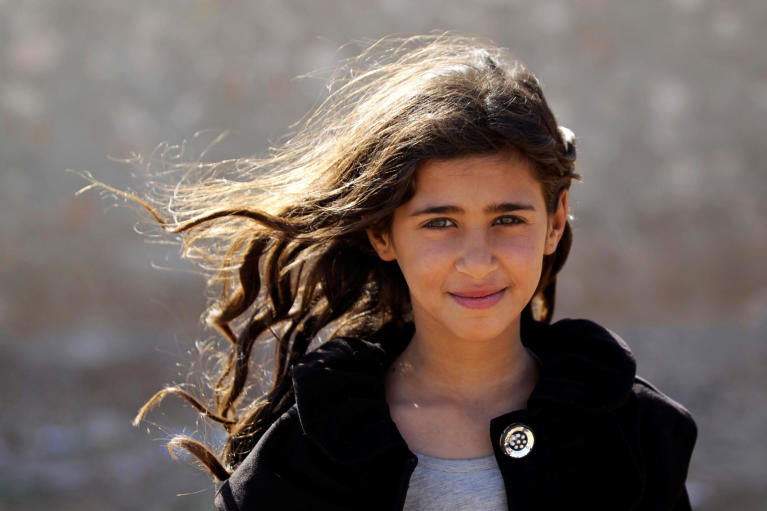 Roald Høvring Published 18. Nov 2016
Global Syria Children Protection Syria crisis War and conflict
Read caption Refugee: Doaa (10) fled together with her parents from the IS-controlled areas inside Syria. Her photo was taken when she crossed the border of Aleppo in September this year. Photo: REUTERS/Khalil Ashawi/NTB Scanpix.
Every five seconds, a child is forced to flee. Doaa (10) fled the war in her homeland Syria. She risks being exposed to many dangers.

Refugee: Doaa (10) fled together with her parents from the IS-controlled areas inside Syria. Her photo was taken by Reuters photographer Khalil Ashawi when she crossed the border of Aleppo in September this year. Like other displaced children, Doaa risks being exposed to many dangers.

50,000 children have been killed as a result of the war in Syria. Ten times as many have been injured.

Doaa risks being injured, like Lujain Hourani (11) was. During an air raid in her hometown, Homs, in Syria, she lost parts of her shoulder. Today, the girl lives together with her family in Lebanon, where most Syrian refugees live under very poor conditions.

Around ten per cent of those killed in the war are children, and ten times as many have been injured. Half a million Syrians, or one in ten, have died as a result of the war since its beginning in 2011.

Most are killed as a direct result of the hostilities, while others have lost their lives because they have not received medical treatment. Only half of the country’s hospitals are operational, and many lack personnel, medicines, and equipment. Nine in ten doctors have fled, been kidnapped or killed.

Since the war broke out, life expectancy has been reduced by about a third, and is now only 55 years.

Eight in ten Syrian refugee children have experienced death in the family as a result of the war, according to a study from a refugee camp in Turkey.

One in four schools have been closed or destroyed inside war-torn Syria.

Doaa’s school might be bombed, like the school of this Syrian girl. She barely made it out alive when her school in Aleppo was hit by an air raid.

Without the possibility of going to school, children risk being forced into marriage, labour, recruited by combatants or forced to flee.

For refugee children, the risk of losing years of education is five times bigger than for other children. More than three million Syrian children receive no education.

Doaa risks suffering the same fate as more than two million children inside war-torn Syria with no access to school.

Even if the family manages to escape to a neighbouring country, she still risks not being able going to school, just like one million other Syrian refugee children who have fled the country.

Because of actions of war, bombing of schools, lack of teachers and materials and widespread poverty, more and more children are losing the opportunity to go to school inside Syria.

#4: Doaa might live as a refugee for a long time

If Doaa leaves Syria, she might end up in a refugee camp like Yamama (10). Since she left Syria in 2013, she has lived in Zaatari camp in Jordan together with her family. They see no possibilities of returning home soon.

Close to 4.8 million people have fled the war in Syria and 50 per cent of these are children. More than six million people are displaced inside Syria.

Hundreds of thousands of children live in besieged areas where aid organisations do not have access. Altogether, six million children are affected by the Syrian war.

Many have been displaced for more than five years, and the average stay in a refugee camp is 20 years.

#5: Doaa might be forced to work and provide for her family

Three in four have to work

Inside Syria, three in four children have to work to provide for their family. In Jordan and Lebanon, the neighbouring countries, almost 50 per cent of Syrian refugee children are forced to work or beg.

Doaa might end up like these two Syrian boys working at a shoe repair shop in Turkey. Many Syrian refugee children are forced to work, and around half a million Syrians do not attend school in Turkey.

Inside Syria, seven in ten families live in extreme poverty. Three in four children have to work to provide for their family, and six million children need aid to survive.

Half of the Syrian refugee children are forced to work or beg in Jordan and Lebanon. Some of them are as young as five years old. Boys usually work outside the family, while girls mostly work at home.

Between September 2015 and February 2016, two children drowned every day on their way to Europe. Most of them travelled from Turkey to Greece. One out of 88 people lost their lives on this route. Since April this year, however, when EU and Turkey made an agreement to stop the boat traffic of refugees from Turkey to Greece, the number of boat refugees has dropped drastically. Even so, there has been an increase in the number of people who have drowned at sea.

Refugees and migrants now choose the more dangerous route between Libya and Italy. The risk of drowning on this route is much higher, and one out of 47 does not reach Europe alive.

7 years old and a soldier

Children down to seven years of age become child soldiers in Syria.

According to UNICEF, warring parties in Syria are increasingly recruiting children to work for them. Earlier in the conflict, the majority was boys between 15 and 17 years of age and they were mostly imposed duties outside the front lines. Today, a growing trend is that younger and younger children, some not more than seven years old, are being recruited to take part in hostilities and suicide operations.

More than half of the child soldiers recruited in 2015 was under 15 years of age. They are imposed tasks such as securing supplies, taking care of the wounded, guarding checkpoints, becoming snipers, or executing prisoners.

Many children are forcibly recruited or lured with gifts and “wages” up to 470 dollars per month. Globally, more than 250,000 children (under 18 years) have been recruited as child soldiers or forced to serve for a warring party.

Close to one in three Syrian refugee girls in Jordan are married before they reach the age of 14. This happened to 14-year-old Omayma’s best friend. Now Omayma, who’s a Syrian girl living in a refugee camp in Jordan, has started her own campaign against child marriage.

In Jordan, the number of child marriages in Syrian refugee families has increased dramatically over the last few years.

#9: Doaa might risk develop psychological problems as a result of war trauma

In a refugee camp in Turkey, nearly half of the Syrian refugee children have developed post-traumatic stress syndrome, according to a study by the Migration Policy Institute.

The war and flight have caused the children serious mental disorders. Eight in ten have experienced death in the family as a result of the war. Six in ten have seen someone being kicked, shot at or physically damaged and three in ten have themselves experienced violence.

More than 15,000 Syrian refugee children have been separated from their parents.

Approximately 3.7 million Syrian children, one in three, have been born since the conflict started more than five years ago. Their lives have been marked by violence, fear and repression. This figure includes more than 151,000 children born as refugees since 2011.

In total, 8.4 million children, more than 80 per cent of all Syrian children, are now affected by the conflict, whether they are living inside the country or as refugees in neighbouring countries.

Many have lost their parents and relatives, and in Syria’s neighbouring countries, more than 15,000 Syrian refugee children have been separated from their parents.