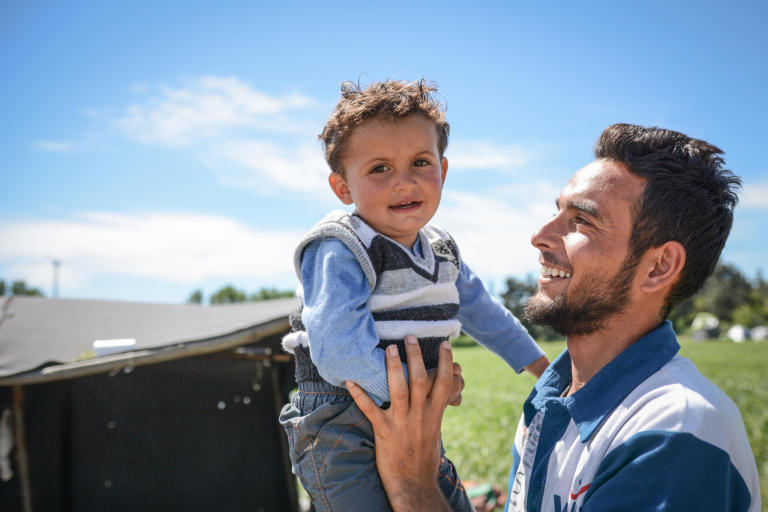 Tiril A. Skarstein Published 29. Jun 2016
Europe Greece Syria Asylum policy Syria crisis EU
Read caption WAITING: Mustafa is playing with his nephew Hisham (3) at Idomeni camp in Greece. Since then the camp has been evacuated and people transferred to other camps in Greece. Photo: Tiril Skarstein, NRC
The uncertainty grinds people down, as refugees and migrants stranded in Greece are waiting to know whether they will get protection in Europe. ”There is no news, no decision, no solution. Where is the humanity?” asks Mustafa.

The young Syrian man is one of more than 50,000 refugees and migrants taking shelter in camps set up by the government, or living in informal settlements across Greece.

“We do not know what is going to happen. Are we staying here for one year or one month?”, Mustafa asks.

”And what shall I tell my friends and family? Should I say we’re going to Europe, or that we’re going back to Turkey or back to Syria, or are we staying in Greece? We do not know. That is our biggest problem. We need to know where we are going”, he adds.

Men, women and children get very little, if any, information about their rights, or any estimates on how many months they will have to wait before they get their asylum interviews. According to EU´s relocation scheme, some of the asylum seekers will be transferred from Greece and Italy to other EU countries, but so far very few have been relocated.

Mustafa hopes to get to the Netherlands. Three of his brothers are there and he wishes to be with them. After more than five years of war in Syria, air raids and fighting has turned much of his home town Aleppo into rubble.

”A bomb exploded in front of my house”, Mustafa says, explaining why he and the rest of his family finally decided to flee.

“Most families have fled Aleppo. Some of them went to other cities inside Syria; it is not that safe, but a bit better than Aleppo. Others moved to Turkey. And some of them, like me, are here in Greece,” he adds.

I want to say: Shame on them! If they came and stayed only for one night, they would know how terrible the situation is in the camps.
Syrian refugee Mustafa´s message to European leaders

Cuts in assistance, and limited rights and opportunities for refugees in Syria´s neighbouring countries, have pushed some families towards Europe. They have taken the dangerous journey by boat from Turkey to Greece, and continued through the Balkans. Most have been heading towards Northern and Western Europe.

But this year the so-called Balkan route has been closed, leaving the refugees stranded in Greece. In March the EU and Turkey also agreed on a controversial deal which would allow Greece to return refugees to Turkey, while the EU would receive a similar number of Syrian refugees directly from Turkey instead.

Mustafa and his family did not know what was being discussed in the corridors of power in Europe.

“I did not know the politics and that countries would stop people here in Greece”, he explains.

His message to European state leaders is clear:

“I want to say: Shame on them! If they came and stayed only for one night, they would know how terrible the situation is in the camps”.

His conclusions are similar to the ones drawn by a large number of aid agencies, working in the area.

See also: NGO statement ahead of the European Council of 28 and 29 June

“If the Greek-Macedonian border is sealed (..), Europe will see massive refugee camps on its soil as large numbers of people seeking protection will become trapped - unable to travel beyond Greece, nor return”, he said, adding that Greece would not be equipped to handle such a situation alone.

Now it has become a reality. The situation in many of the camps which have been established in Greece during the last months is well below humanitarian standards and the asylum system is unable to cope with the large number of requests.

For the first time since the Balkan wars, NRC is again working in refugee camps on European soil, supporting the Greek Government with site management, providing information to asylum seekers and trying to improve their living conditions and safety.

“Against all odds, the crisis response on European soil has failed to meet standards we strive to achieve in other places. Most camps still need proper access to water and sanitation, there is not sufficient food, and refugees are exposed to unacceptable level of risk. Security and protection is a major concern both on the mainland and islands; there are severe fire hazards; women and children are made to live in the same space as young, single men, unaccompanied children are detained and there is no formal education provided”, says Area Manager in Thessaloniki Benjamin Marty.

NRC and other organizations have repeatedly called for Europe to take more responsibility.

At a camp close to the Macedonian border, Mustafa is collaborating with other refugees to write down messages they want to show to the media.

”Canada help us. Europe let us down”, ”Your silence is killing us” and ”Europe, where is the humanity?”  read the texts on their small pieces of cardboard – which they hold up, when international press is visiting. But they are not visiting very often anymore.

Mustafa braces himself for another day with no news from the asylum services.

”We are still waiting for a solution. But it seems as though it will take a long time”, he says.