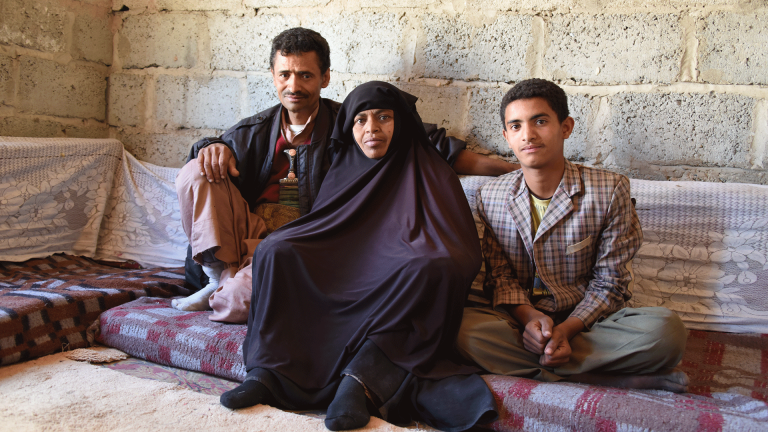 Arvinn Gadgil,
Director of Policy and Partnerships, NRC Published 16. Sep 2016
Internal displacement UN
Read caption Mahmoud Zeid and his wife Sabah had to flee their home in July 2015 following an airstrike close to their neighbourhood in Jabal Al Nugm. Photo: NRC/Karl Schembri.
On Monday, world leaders will meet in New York to discuss how to tackle displacement and migration. However, they have already made enormous concessions on their ambition. They are excluding 2/3 of those who need them the most.

In Yemen, 2.2 million people have been forced to flee their homes, but have few opportunities to leave the war-torn country. My colleague in Sana’a met Mahmoud Zeid and his wife Sabah. They spoke of how they remember having to flee their home in July 2015 following an airstrike. Zeid used to work as a tailor, but since the war and blockade started, he no longer has a job. Sabah suffers from kidney failure. They have six children, no income, and are displaced from their home.

We know now that the Zeid family’s destiny is not going to be affected by the meeting of world leaders on Monday. The reason? They did not cross a border – they are internally displaced people, and not refugees. They share that destiny with 41 million people around the world. The total number of people displaced in the world is 65 million, and almost 2/3 of them never crossed a border – but are nevertheless in need of protection and assistance.

High Level Summit on Refugees and Migrants
Since November last year, Member States have negotiated how to respond to displacement and migration, following a call from the UN Secretary General for a more "predictable and equitable way of responding to large movements of refugees". This has resulted in a document that will, on a meeting scheduled to take place on the Monday, be adopted as a General Assembly Resolution. The declaration reinforces the rights of people who have, either voluntary or forcibly, crossed an international border.

However, even for those who cross borders, the declaration stops short of immediate tangible improvement. Instead of stepping up to the increasing demand for a solution, the reality of the crisis is simply not met with an appropriate response. Member States have shown an absence of leadership, which has resulted in more of a laundry list of current practices, rather than a transformed system capable of addressing the current reality. UNHCR has gone as far as to concede that "at least this does not move us backwards".

For internally displaced people, however, being practically ignored cannot be characterised as anything but a step backwards. As humanitarians it is impossible to accept that people's access to life-saving help and attention is defined by whether they have crossed a line on a map.

The strongest fashion trend in international politics at the moment allows for such an illogical conclusion. Every time the issue of internally displaced is tabled on an international arena, the response is resolute. It is shut down under the claim that upholding the principle of sovereignty and non-interference in internal affairs trumps any appeal for compassion. For humanitarians this is a fashion so void of humanity and responsibility that it has absolutely no credence in the face of repeated and massive abuse of the rights of internally displaced people.

Internally displaced people have also fled armed conflict, violence or disasters. Many refugees who flee their homes to survive in other countries have already moved several times before they cross an international border. It is the dire conditions and lack of support that finally push them to leave their countries, to face the often dangerous and uncertain journey across international borders.

On Friday Internal Displacement Monitoring Center launched their six month's update. The launch included updated figures on displacement in countries hardest hit by conflict of disasters. Overall, information collected so far this year is already showing a staggering increase in new internal displacement. Only over the first eight months of the year, conflict has displaced 900,000 more people in Syria, and 478,000 in Yemen.

No time to lose

To give internally displaced people the chance to return to a dignified life, they must have full freedom of movement, access to basic services, labour markets, health, education, adequate housing, sustainable livelihoods and secure land tenure. We must work towards real, measurable improvements in the lives of internally displaced people in the form of specific improvements in health, education, economic well-being and safety. Member States should ensure that financial commitments made to migrants and refugees at the 19th September meeting do not divert funding from programming for internal displacement.

Despite having been negotiated within a limiting global political environment where fashions trump reason, the Declaration at least invites to a debate between Member States on issues of international displacement. This requires strong leadership from national governments. Until then, we also call on leaders and members of the public to keep the spotlight of our compassion on the internally displaced, alongside refugees and migrants.
It is a great failure of humanity to limit whom we help based on whether or not they have crossed a line on a map. Leaders attending the summit on Monday have a chance to follow the fashion in international politics, or truly address the needs.