Published 15. Dec 2022
Afghanistan
The Norwegian Refugee Council (NRC) calls on the Taliban authorities to halt further evictions of internally displaced people (IDPs) from settlements across Afghanistan, until they have found sustainable alternatives.

"In the midst of another harsh Afghan winter approximately twenty thousand displaced people have been evicted from their homes in Badghis province by Taliban authorities. Many now have no food to feed their children and no way of keeping warm as temperatures drop below zero,” said Neil Turner, NRC's country director in Afghanistan.

"The Badghis authorities must recognize that they have responsibilities towards the population. It is essential that authorities ensure families have shelter and are able to support themselves before undertaking any further evictions; and should also assist those already evicted."

Previous decades of fighting, and more recently drought, have forced thousands of families to flee their homes in the rural areas of Badghis and seek out safety and humanitarian support in the capital, Qala-e-Naw. They have eked out an existence on the city's outskirts, relying on haphazard combinations of humanitarian assistance and manual labour.

The authorities in Badghis have insisted these families return to their original homes and that the settlements are dismantled. However, many have no homes in their villages of origin and in the current economic situation it will be difficult for them to find work and survive there. NRC’s Camp Management team in Afghanistan has confirmed that just under 20,000 people have been evicted in the past weeks.

“We put all our belongings on two donkeys and walked all the way here. We arrived almost at midnight the day we were evicted. It was very cold that day. We spent five to six years in that settlement and now we have come here, and we don’t have anywhere to live. Almost all of my six kids have become sick. We have nothing to eat and there is no one to support us. The local people here already have their own financial issues,” said a widow who was evicted from her home in Qala-e-Naw to her village of origin in Badghis province.

Months of negotiations with the humanitarian community and small-scale pilot returns processes have failed to convince the authorities to follow a slower and more sustainable returns process. Instead, the displaced families have been forced to leave. NRC has launched an emergency response to provide humanitarian support in the form of cash grants and essential items to families on the move in Badghis province.

"All further evictions must be halted until the Taliban authorities, with the support of the international and humanitarian communities, have found long-term solutions for highly vulnerable displaced communities," said Turner. 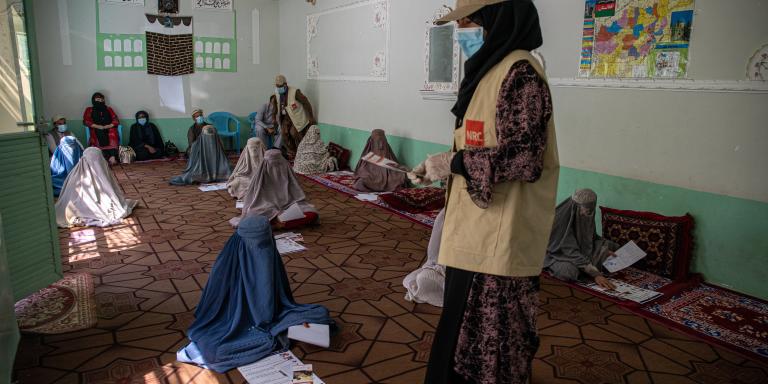