Published 28. Jan 2020
Burkina Faso
The number of people displaced in Burkina Faso increased tenfold last year to over 560,000. The figure is predicted to skyrocket to 900,000 people by April this year as horrific violence continues to force families from their homes.

“Burkina Faso needs more than bullets and bombs. Military engagement alone is failing to protect vulnerable communities. Donors supporting military efforts to quell the extreme violence have not yet responded to the enormous humanitarian needs with equal emphasis,” warned NRC’s Secretary General Jan Egeland, who is visiting the country this week.

France and states from Africa’s Sahel region have increased the predominantly security-oriented response to the indiscriminate violence of many armed militants in northern and eastern Burkina Faso. But some of the large-scale military operations against armed groups have had dire humanitarian consequences forcing communities to flee their homes in thousands.

The country is now on the brink of a hunger crisis. A staggering one in ten people in Burkina Faso will need food assistance by June. The violence is also storing up problems for future generations, as some armed groups deliberately target schools and teachers, leaving over 330,000 children without access to education.

“In the northern town of Barsalogho, I heard horrific stories from some of the 70,000 who have recently fled to camps where there is an acute need of water, sanitation, food and education. Our work is severely hampered by insecurity and lack of funding. Donor governments have not understood that this is the world’s fastest-growing displacement crisis. We still see a small aid response in a huge human catastrophe,” Egeland said.

Last year, less than half of the money required to meet humanitarian needs was received.

“We need to urgently scale up our presence to provide the assistance and protection these families deserve. Many told me they can’t sleep at night for fear of new attacks. Most are single mother lead as their husbands and fathers are often dead or have fled from the targeted killings of men,” said Egeland.

The international community, alongside regional actors supporting the military response must also acknowledge the root causes of the conflict that must be addressed, and for dialogue to be re-established between communities and authorities.

“I don’t understand what has happened, we used to talk to each other,” said Mariam, a displaced mother in Barsalogho. “If there were tensions between communities, leaders would have discussed according to our tradition. Now no one talks anymore, there are walls between us.”

Photos and B-roll including video interviews with affected people can be downloaded for free use. 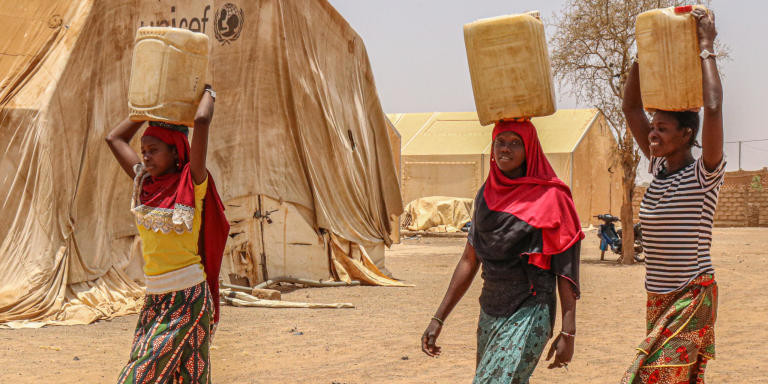