Urgent action is needed to help tens of thousands of people forced to flee their homes following armed attacks in eastern Democratic Republic of Congo, 18 humanitarian organizations warned today. Those who remain are trapped between the border of Uganda and an area of DRC that is being terrorized by armed groups and close to the Ebola outbreak which has claimed over 950 lives.

The organizations said this alarming humanitarian situation was triggered by attacks which began on March 30 and have continued for a month in Beni territory, North Kivu. According to local health authorities, over 60,000 people have been displaced in April alone.

Seven thousand of them are sheltering in a primary school just 1 km from the border crossing to Uganda. The only water available to drink is from the river and there are only a few toilets at the school, meaning the threat of disease spreading is high. As no food is being provided, for many people the only way to get food is to go back to their villages where they don’t feel safe.

Tamba Emmanuel Danmbi-saa, Oxfam's Humanitarian Program Manager in the DRC, said: “This is a deeply worrying situation. These people fear going back to their homes and are being forced to live in cramped, unsanitary conditions, in an area where Ebola remains a significant threat. These people urgently need food and adequate sanitation facilities as well as clean water and health services.”

The humanitarian organizations said that ongoing violence in the area makes reaching people with aid from within DRC extremely difficult and Ugandan authorities are preparing to receive an influx of new refugees. In Uganda, they could have greater access to basic services, including health care, and the protection they need. However, there are serious concerns about reports that people are being prevented from crossing the border into Uganda at at least sixteen official crossings.

As a result, some displaced people are being left with little choice but to return to the villages they fled, where they are at risk of further attacks. Others are avoiding official border points and choosing to cross illegally through the forests along the border or by boat across Lake Albert. This also increases the risk of Ebola being spread, since people are not being screened like they would be at the official border crossings.

Francis Iwa, Executive Director of Care for Forced Migrants (CAFOMI), said: “These unofficial crossings are placing people in search of refuge at an increased, and totally unnecessary risks of sexual exploitation and abuse. Once they enter Uganda, they also are avoiding official immigration procedures and registration as refugees - which means they may not be screened for Ebola and will be unable to access the very services prepared to assist them.”

Elijah Okeyo, Country Director of the International Rescue Committee in Uganda said: “The governments on both sides of the border need to work with the humanitarian community to protect the displaced people and provide the help they urgently need.”

Heather Kerr, Save the Children’s Country Director in DRC, said: “We estimate at least 30,000 children have been displaced in this violence, and are now living in squalid conditions. Many of these children would have seen terrifying violence, with family members attacked and their homes destroyed. Now, they are exposed to diseases like Ebola, which hits children hardest. This is an unacceptable situation and it needs to be resolved, now.”

The 18 humanitarian organizations are also calling on Congolese and Ugandan authorities, the United Nations High Commissioner for Refugees, international organizations and donors to urgently cooperate and pool resources to ensure people receive the help they need as quickly as possible. They also need to make sure they are prepared to cope with a new refugee influx from DRC as well as meeting the needs of refugees already in Uganda.

They are making the following appeals:

- Congolese authorities should ensure that displaced people are free to move, including to safely cross the border and seek assistance and protection in Uganda.

- Congolese and Ugandan authorities should jointly call for and facilitate cross-border humanitarian operations, to ensure displaced people in areas bordering Uganda have greater access to humanitarian services within the DRC.

- Ugandan and Congolese authorities, the UNHCR, the international organizations and donors must intensify collaboration and resource mobilization to ensure adequate preparations are made to receive any new refugee influx from DRC and to meet the needs of refugees already in Uganda. 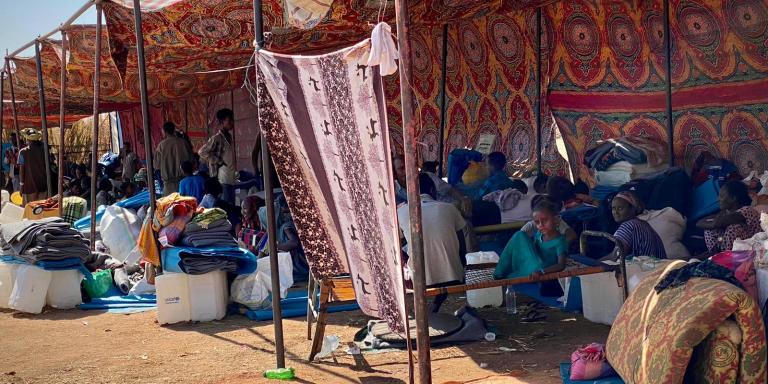 Pregnant women, separated families and sick elderly people are among thousands of refugees continuing to arrive daily into Sudan from conflict-stricken Ethiopia. Many appear traumatised and all are in dire need of humanitarian support.