“A sense of stability and safety is enough”

Racha El Daoi|Published 09. May 2017
Lebanon Shelter and settlements
“The moment we settle down and start to feel stable our reality is ripped apart once again. My family and I came to Lebanon 5 years ago and since then we have moved more than three times. Every time we lose everything and have to start over from scratch,” says Ali.

Ahmad and Ali and their families fled the war in Syria when the fighting escalated in their villages, and sought refuge in Lebanon’s Bekaa Valley. More than 360,000 refugees currently live in the Bekaa Valley, many of whom are living in scattered informal tented settlements with basic living conditions and limited access to essential services, such as clean water and adequate sanitation.

In April, over 10,000 Syrian refugees living in informal tented settlements in proximity to a nearby airbase were issued eviction orders and had to leave their temporary homes. For many refugees affected, this is the third or fourth time they have been evicted and lost their homes.

“It’s not like we had any choice, we packed our things and prepared to leave. Lebanese authorities told us that we had to leave the land in a week due to security reason as it is next to the airbase,” says Ahmad. “Luckily, the municipality of Bar Elias agreed to expand the existing ITS [informal tented settlement] with our tents and we moved here. Although the Lebanese authorities treated us very nice, honestly, this has affected us a lot and it has had a negative impact on all the 35 families that were evicted [from our informal tented settlement] to the extent that we cannot afford to get food and fix the new tents at the same time so we will be hungry if no one supports us. Now we have to build new tents and we have to buy all the necessary utilities such as latrines and concrete which we do not have money for,” Ahmad continued.

It is almost impossible to believe that entire families are living in these conditions. Tents consist of a few concrete bricks and wooden poles with green and white plastic sheets serving as walls. There is no electricity, no water, no latrines, and no sinks. The ground beneath us is dirt and rocks. There is no floor. The children are giggling and excited, bringing us chairs to express their hospitality, and not wanting us to sit on the dirt.

As the tents are being set up in a rural area, the families are struggling to make ends meet. With no concrete, they are forced to sleep on the dirt with only thin carpets beneath them. The children have not been to schools since the evictions took place.

“I do not work and I have no income so how will I manage to rebuild the tent again?” Ali asks. “I am 71 and I sleep on dirt, imagine, how humiliating that feels,” he says with a look of despair in his eyes.

“We are in urgent need of assistance to lay concrete on the ground because there are a lot of worms and insects coming out of the land that are biting the children. I am afraid that any of the children would be bitten and getting a serious infection which would add to our burden as we lack access to healthcare. Therefore, it is very important and necessary that the soil gets sprayed with insecticides for our safety” added Ali.

This is the harsh reality that many Syrian refugees are experiencing after years of displacement. The Syrian conflict has been going on for over six years and with no clear solution at the horizon, the need for humanitarian assistance continues to increase. Refugees have been forced to move from one location, sometimes many times over, and they are not able to feel a sense of stability or safety in their everyday life.

As savings and resources are exhausted, international aid is increasingly limited and host country regulations are tightened for refugees, they are forced to resort to negative coping mechanism such as sending children to work, early marriages and falling into debts to survive. Before leaving the tent, the two men look at us, sharing a unified message. “No one of us wanted this to happen and we want to return more than anything in the world as soon as there is any sense of stability and safety in Syria. But until that happens people should treat each other with love and dignity. There is no difference between races and we are all one. We hope that humanity will prevail.” 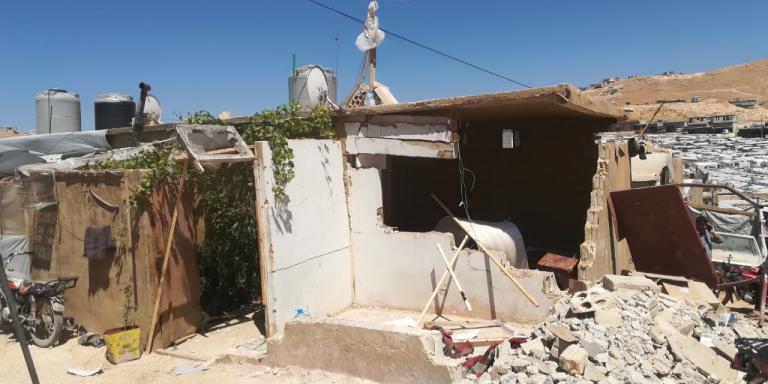 Joint statement by the Lebanon Humanitarian INGO Forum (LHIF), of which NRC is a member. 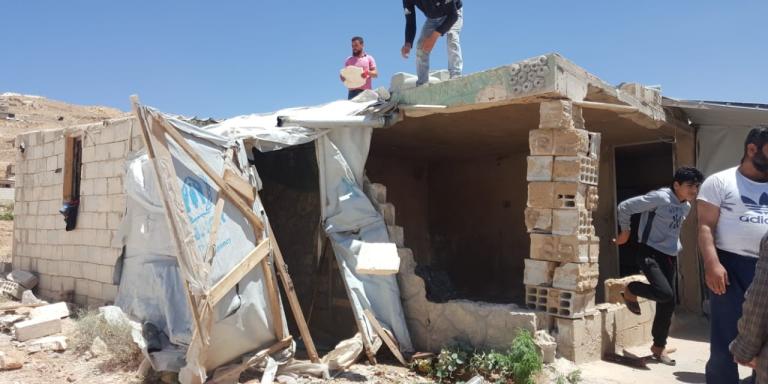 Demolition of homes in Arsal

Education for Syrian refugees at risk

Syrian refugee parents are fighting for their children’s right to education and to prevent their children from becoming a lost generation.