Maria Petrakis and Maria Gounaridou|Published 18. Dec 2017
Europe Greece Asylum policy Education
In 2015, nearly a million people from countries ranging from Afghanistan to Yemen fled to Greece, the gateway to safety in Europe. Some are making a home in Greece, learning a language that gave a name to the continent: Evropi.

On a whiteboard, Vassilis Papadopoulos has written the word “late” and circled it. Fifty minutes into the class, Sekou Kamara walks in, but Papadopoulos gently pushes him back out the door.

“You wanted to know what late is?” Papadopoulos says to the laughter of the men and women in the classroom. “This is late. My friend,” he says to Kamara. “I will see you tomorrow.”

Two and a half years after a million refugees and migrants fled from the Turkish coast to the Greek islands to reach continental Europe, tens of thousands of refugees remain in Greece. Some feel like captives because of EU countries’ reluctance to receive them and still hope to move on. Others, like Kamara, see their future here.

Kamara arrived on the Greek island of Lesvos from Guinea about a year ago, aiming to get to Norway. He turned 18 in September and while he waits to get asylum in Greece, he takes Greek and English classes every day, mostly with the Norwegian Refugee Council (NRC) but also with other NGOs. His bus ride to class takes him 45 minutes. He’s no longer itching for Norway.

“I didn’t come to choose a country,” Kamara says. “I came to look for international protection. If it is Greece that will give it to me, then I want to stay in Greece. The language is not a problem for me. I will learn Greek. And I will learn English as well.”

In class, in front of classmates from Afghanistan, China and Ukraine, Kamara confidently conjugates the verb “to read” in Greek: “I read, you read, he reads, we read” and then the verb “to hear” on the whiteboard. Kamara, an orphan, says he never went to school in Guinea and first learned to write at a football academy in his native country. In Greece, he now is playing football at a local club, combining his two passions. “I go to school every day. Then I go back home and I eat. Then I go to practise football,” he says.

“He’s a star,” says Kostas Tziaras, who has taught Greek for NRC’s education programmes, funded by the European Civil Protection and Humanitarian Aid Operations (ECHO) for the past two years. He says he’s humbled by the commitment of his students, some of whom commute two hours to get to class.

I didn’t come to choose a country. I came to look for international protection. If it is Greece that will give it to me, then I want to stay in Greece.
Kamara from Guinea

“Greece is no longer just a port of entry for onward travel to other countries,” says Shaun Scales, Country Director for NRC in Greece. “For an increasing number of refugees it represents their new home where they are safe from the dangers of conflict. These families and individuals need a different kind of support to face the challenges and embrace the opportunities presented by a new life in Greece.”

In Kamara’s English class – the one he missed – Papadopoulos is teaching adults ranging in ages from late teens to early 50s. He’s explaining the difference between “c” and “s”, asking students their names, getting them to spell out their surnames letter by letter, telling them that an address, once written down in English, can also be coded into their cell phones so they don’t forget it.

Three Afghani men are grouped over one textbook, enunciating the words of the English alphabet. Papadopoulos asks them as to why there is only one book between three people – it’s because one recently tried to illegally cross the border to Italy, was caught and lost all his belongings, including the book he had been assigned.

Papadopoulos teases him. “Why should I give you another book?” he says. “My boss would get mad. Maybe you can find it in Italy? Maybe next week you decide to go to Albania. How do I know a new book won’t end up in Albania next time?” He turns to the other two and laughingly says: “Next time he says he is going somewhere, put him in a room and lock the door.”

As Papadopoulos’s class ends, the attendees stream out of the room, some out the door, some to Greek 1 for adult beginners, some to Greek 3 for the advanced adults.

Kamara says he doesn’t care which class he’s in, as long as he’s in a classroom. He takes beginner and advanced lessons, even though his teachers say he doesn’t need to.

“The Greeks saved my life. They took me out of the sea, they gave me food, clothes, a shelter, Kamara says. “Greece is my home now.” 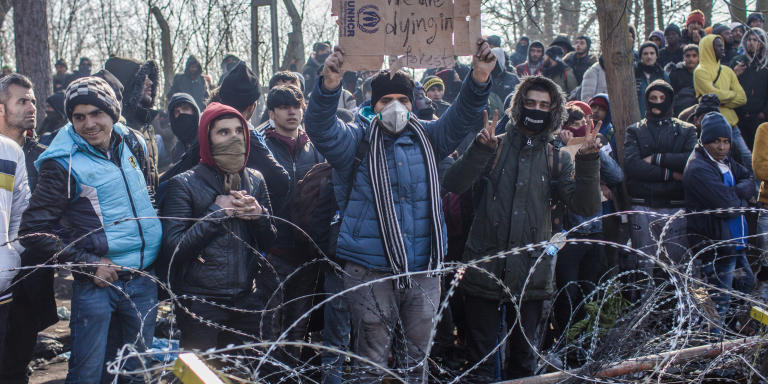 Turkey recently announced that they will no longer be preventing refugees and migrants from crossing the border into Europe. Since then, tens of thousands of refugees and migrants have arrived at the border area between Turkey and mainland Greece, according to the UN. Greek authorities have responded by announcing that they will not allow people to seek asylum and will be sending people back to Turkey. The Greek police are reportedly using tear gas to stop people from getting into the country.