How to strangle a nation

This op-ed was first published by The Telegraph. Read it here.

Some weeks ago, Mark Lowcock, the UN's humanitarian chief, warned the Security Council that there will be a famine in Yemen and “it will be the largest famine the world has seen in many decades, with millions of victims." Later, the research based famine early warnings systems network warned that cities sheltering families displaced by the war could face mass starvation in few months. Towns reliant on sea imports will fall first. Communities where malnutrition is already prevalent will be hardest hit.

We could weekly witness the death of thousands of Yemenis from lack of food and medicine. People who have long been trapped under crossfire and air raids.

This famine is not caused by drought, blight or crop failure. It is caused solely by man. Most importantly by Saudi-led protracted commercial blockade of Yemen’s ports and airports. A blockade silently facilitated by the US, UK and other Westerns powers supporting the Saudi-led military coalition.

No humanitarian relief can meet the needs created by this blockade of a nation with over 27 million totally dependent on food imports. Our humanitarian aid workers have witnessed the collapse of Yemen’s basic civil services and tried to prevent the explosive spread of cholera while authorities in Sana’a have made our access to provinces difficult.

This weekend, the world’s worst humanitarian crisis deteriorated further when, on top of the blockade, we saw an outbreak of heavy clashes across Sana’a and other governorates in northern Yemen. Adding fuel to the fire, this senseless new war between old allies, the Houthis and General People’s Congress (GPC) security forces, is now producing the latest in a line of harrowing attacks on civilians in Yemen. It further terrorises civilians, paralyses lifesaving relief for millions and grounds aid workers in crossfire.

My colleagues inside Sana’a tell me that they cannot move from the basement of their houses paralysing our efforts to reach the needy with food, water, healthcare and education. One witnessed a thirteen-year-old boy being killed by snipers as he tried to leave his house to find safety.

Our humanitarian efforts can only reach the most vulnerable of the 21 million Yemenis in need. Now even this lifeline is broken.

The Saudi-led blockade of commercial, civilian goods punishes ordinary women, men and children in Yemen for what military and political leaders have done. It aggravates the suffering produced by the bombs that continue to fall and the crossfire that is ongoing. And it is happening with the active complicity of a handful of other nations, including Western powers on the Saudi side.

These nations have each silently played their part in Yemen’s collapse. They profit from the sale of military fighter jets, missiles and logistical support to Saudi Arabia. They provide military advice, select targets to bomb, and train Saudi soldiers. All while the UN has accused the Saudi-led coalition of hitting civilian targets, and dropping bombs in densely populated civilian areas. Iran has provided military and economic support to the other side of the conflict.

When I visited Yemen in May, I waded through the devastation of entire neighbourhoods in the capital Sana’a. In the port city of Hodeida, the fear was so great that I heard mothers had rushed their children from their hospital IV drips and ran for cover when they heard the planes overhead. Now, the situation has become even worse.

Our asks are simple: we need an instant ceasefire in Northern Yemen between the old allies that now fight each other. In the larger conflict between north and south, hostilities must also end and parties must be lead to the negotiation table by the UN, US, UK and Iran. The Saudi-led coalition must end the blockade and allow commercial goods in through the ports. Their rivals, the Houthis, must cease interfering with our humanitarian operations on the ground. Aid must reach innocent children, women and men before death does.

We cannot be complicit in the deliberate strangling of a nation. Yemen is already the world’s largest humanitarian crisis. Unless things change, conditions are set to become unimaginably worse. 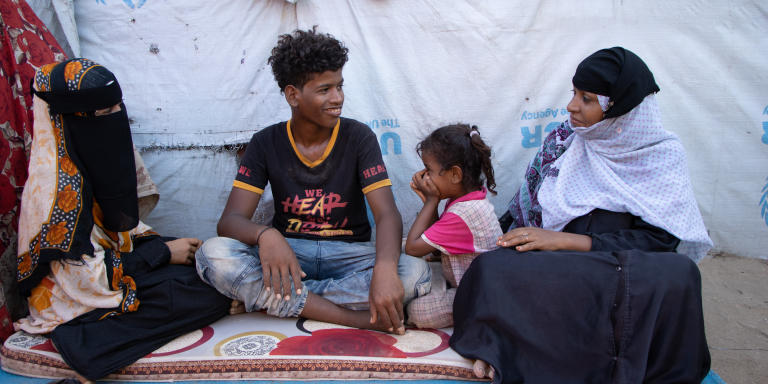