The wail of women in war

Jasmin Baulhassani|Published 04. Mar 2016
Gender based violence
One in three women are exposed to Gender-Based Violence around the world and, in wars, poverty exacerbates this violence. An exceeding number of women die in the hands of men every year, as the common acceptance of abuse against women and girls leaves them completely stranded, with miniscule to no support.

The place she once called home has turned to dust. Joyous moments with her family perish in her memory as she is forced to flee. Many of her loved ones were killed, others she had to leave behind. On her perilous journey for survival, she clings to the hope for safety – but she is far from safe.

UN Women reported that one in five refugees or displaced women in humanitarian crises are victims of sexual violence.

"We know from Iraq that there is an increased level of intimate partner violence, high levels of sexual harassment by employers and taxi drivers, and a significant number of sexual commercial transactions inside and outside camps," says Christine Wiik, Gender adviser at NRC.

Wiik claims Syrian refugee women cease to report these attacks, as they feel they have no one to speak to who can take action for them.

Severing the tragedy of sexual violence is the incrimination of the victims rather that the perpetrators. In many communities, a man's honour is believed to be linked to the expected behaviours and the virginity of their female connections.

"In Afghanistan, it is deemed that the woman may have enticed it, or that she is the one carrying the shame and the guilt, and that the honour must be redeemed with so called "honour killings", to rectify the family's honour," says Christine Wiik, Gender adviser at NRC.

A recent report by Afghanistan's Independent Human Rights Commission exposed how degrading and invasive virginity tests are employed regularly, to ensure the absence of sexual intercourse before marriage. Despite the test's scientific inaccuracy, it is used in trials as evidence to sentence and to punish women and girls for adultery.

Today, "honour" based violence is practiced in numerous countries around the world, ending thousands of young girls' and women's lives every year.

Organised crime activities, such as gang violence and human trafficking, make Latin America the region with the highest female murder rates in the world.

The armed conflict in Colombia disproportionally affects women and girls, as they account for 86 per cent of the victims of crimes against freedom and sexual integrity. Many criminals specifically target and violate women and children as a way to assert their power and superiority in the area.

"The permanent presence of the armed illegal groups continues to increase the violence against women, of all ages, in forms of verbal and psychological violence, torture, sexual violence and sexual exploitation. Many women are raped in front of their family members, subjected to slavery, have unwanted pregnancies and are often exposed to sexually transmitted diseases," says Cecilia Bertolini, NRC's Gender-based Violence Project Manager in Colombia.

The illegal armed groups in Colombia are known to use sexual violence to forcibly recruit women and girls. If a member of the illegal groups becomes interested in a woman or a girl, they may force her to participate in illicit activities, cook for them, clean for them and subject her to various forms of abuse.

Despite women and girls' lack of involvement in wars, they suffer the heaviest from the consequences. In addition to experiencing exceedingly brutal violence, displaced women and girls undergo severe psychological torment and distress as a result of their traumas.

Quite often, women in displacement are forced to remain completely isolated in their tents, under the pretences of being shielded from outside dangers or following cultural norms.

A woman cries in the ruins of what used to be her home in Gaza. Photo: NRC/Emad Badwan

NRC identified a pattern of deep depression among women in displacement and a vast desire to die, as they were barred from living a dignified life.

This prompted the recognition that, in order to access our female beneficiaries, it is crucial to employ female staff members.

Becky Bakr Abdulla is our media coordinator in Iraq. Her work involves raising awareness and support for the humanitarian crisis by addressing the needs of the civilian population.

Abdulla moved from Norway to Iraq last year and claims the biggest challenge she faces in the field is to stay mentally rested, healthy and in balance.

"I spend most of my working hours visiting displaced families in camps and in non-camp locations, where NRC is present assisting the most vulnerable families, displaced as a result of the heavy violence in Iraq and Syria. Each individual I meet has a heart-breaking story, which includes a lot of injustice and pain," she says.

Our Gender-based Violence Prevention and Response programme in Erbil, in the Kurdistan Region of Iraq, was implemented in 2013.

"The programme is a pilot for NRC globally and has an overall vision to change the imbalance of power between men and women," says Abdulla. She explains how neutralising this imbalance will contribute to a reduction of the risk of violence against women.

As the leading agency in Gender-based Violence Prevention and Response in Erbil today, NRC provides safe spaces with psychosocial group activities, where females and males can engage in a dignified manner. Depending on their interests, activities include sports, sewing and knitting, games, playing music, learning IT or English and unstructured social time.

In order to analyse our female beneficiaries' access to services and resources through the community, we train and mentor concerned women and girls from camp communities and collective centres to conduct safety audits. As a result, we are able to address their safety concerns and provide them with helpful solutions.

Abdulla claims the impacting stories, filled with human suffering, must be told to the broader, international public in order to advocate for change and that this task is what makes her job worthwhile.

"Some of the strongest individuals I have known, I met through my work for NRC in Iraq, and for this I feel very privileged," she says.

The idea of an all-female shelter in Afghanistan emerged in 2013, as the team found itself on a mission to seek out the most vulnerable sheltered beneficiaries in Kabul, which were the female-headed, or widow-headed, households.

"These are generally women who are displaced and apart from their husband, because their husband has been killed or is disabled or is a drug addict," says Nicholas Leftwich, our Area Manager in Afghanistan.

Female-headed households are particularly vulnerable when under improvised shelter, as women's impossible task of providing for their children in crises puts them at great risk of sexual exploitation. 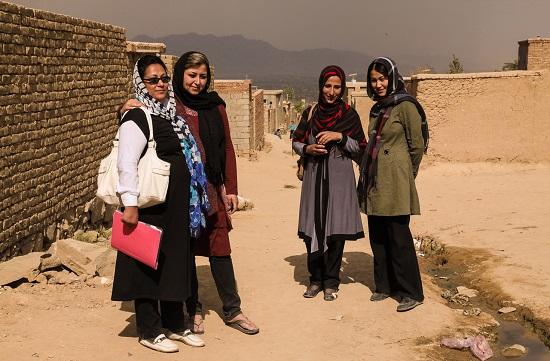 The all-female shelter programme was put together to reach vulnerable female-headed households in Kabul. It is run entirely by a group of inspiring female staff members. Photo: NRC/Danielle Moylan

Leftwich says it was essential to assemble an all-female team, in order to gain access to their female beneficiaries. This way, there would be no chance for a female team-leader to be usurped by a male, and they would be able to develop their very own strategy according to the specific needs of the vulnerable women.

"One of the things that I find most heart-warming about it is they have done such a fantastic job and overachieved, exceeded at all expectations, the odds," says Leftwich.

The Female Shelter Programme in Kabul is run entirely by a group of strong female staff members, who assist displaced women in building their very own homes. Proper housing cause a remarkable improvement in the female beneficiaries' lives, as it provides them with a base to rebuild their lives, in addition to physical protection.

"One of the wonderful things about the female shelter team is that they do have a lot of access into the community and amongst the women there, so if they hear of instances of violence against women, then they can refer those cases," says Leftwich.