Ane Høyem|Published 01. Apr 2016
Cote d´Ivoire
After nine years of assisting refugees and internally displaced people in Cote d'Ivoire, the Norwegian Refugee Council (NRC) has closed down its operations in the country.

"Our programme has had a positive impact on the population of Côte d’Ivoire and our achievements make me proud,” says Cheick Ba, NRC´s Country Director in Cote d'Ivoire.

NRC has been present in Cote d'Ivoire since 2006, after various crises resulted in massive displacements in the country. At the height of the crisis, about 250,000 people were refugees in neighbouring countries.

Today, Cote d'Ivoire is once again stable and security is ensured in almost the entire country. As a result, most of the refugees have returned home.  The economy is also blooming.

“More than 5 years after the post-electoral crisis, the socio-political, economic and security situation have all improved immensely,” says Marianne Irion, NRC Head of Region for Central and West Africa.

Since the start up, more than 400,000 people have benefitted from NRC’s assistance. In 2007, activities started in Duékoué, in the West of the country, in Bouaké, in the Centre, and in the capital, Abidjan. During the first years, NRC mainly focused on Education and Civil documentation.

After the post-electoral crisis in 2010, NRC extended its activities in Duékoué and Bloléquin to include Food Security and Livelihood, Land dispute resolution, WASH and Shelter, in order to assist the internally displaced and returnees.

“We have been able to advocate for the Rights of civilians and protected the population through our different programmes,” says Cheick Ba.

The creation of a local NGO

March 31st marks the last day of NRC’s presence in Cote d'Ivoire. Upon exit, NRC has facilitated the creation of a local NGO, Conseil pour l’Assistance Humanitaire et le Développement (CAHD), by former NRC national staff. The NGO will continue to cover the most prominent needs on the ground.

“It is very positive that some of our former staff will continue to work for a national NGO that springs out of the work of NRC. It will, however, be important that donors are supportive of such initiatives and fund the organisation in the future for the sustainability of its work,” says Marianne Irion.

In 2015, two international, and a total of 110 national, staff worked for NRC in the country. NRC's Country Director expresses gratitude towards the staff and praises their professionalism in the exit process.

“Despite the difficult context of closure, the team remained professional and committed to the end. They took an active part in all stages of the exit process and helped make things easier. I want to say thank you to all of them,” says Cheick Ba.

Marianne Irion shares this view:  “I am impressed by the staff’s dedication and the quality of programme delivery towards the end of the implementation period. NRC should be forever grateful for this work, in addition to everyone who has been involved in the Cote d'Ivoire mission during these years”.

In shelter programme NRC has built:

In the ICLA programme NRC has:

A protocol made by the Norwegian Refugee Council (NRC) on community land, helps guide and strengthen the relations amongst the residents in the community of Paule Oula in Côte d’Ivoire.

Since the outbreak of the Ebola virus in 2013, many communities in the western border region of Côte d’Ivoire continue to live under the threat of contamination. NRC has implemented school projects focusing on classroom rehabilitation and hygiene promotion in order to reduce the threat among children. 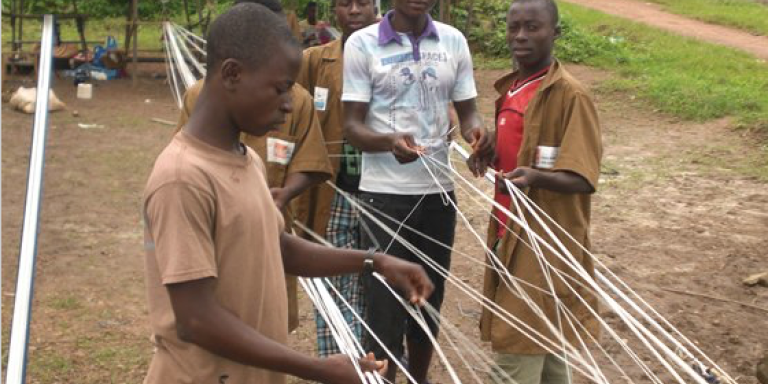 Elodie and Brahima are both deaf and living in Danané, one of the towns hardest hit by the conflict in western Côte d’Ivoire. For Elodie and Brahima, getting an education or a job seemed almost impossible.