Oda Lykke Mortensen|Published 27. Jun 2019
Mozambique Expert deployment Gender based violence NORCAP
NORCAP experts warn that a long-term approach is needed to address gender-based violence in Mozambique. Three months after Cyclone Idai, humanitarian agencies are scaling down efforts in the affected areas, but the work is far from over.

“I have been married for two years,” says Delfina (17). Now expecting her first child.

She has just attended a session on contraception at a temporary health clinic in Macharote, arranged by NORCAP expert Sabine Nana, together with local nurses and midwifes.

Delfina is one of many teenagers in Mozambique being married off while still a child.

Mozambique is one of the world’s poorest countries and has the ninth highest child marriage prevalence rate in the world.

In March, the country was struck by two cyclones – one worse than the other.  The first, cyclone Idai was reported as one of the worst weather-related disasters to hit the southern hemisphere on record.

1.85 million people were affected. 200,000 homes, classrooms and other facilities were destroyed, including 45 health clinics. Floods accompanied the storm, and isolated entire communities. Families spent days without food or clean water – waiting to be rescued or for the water to withdraw.

How does this affect people’s protection from gender-based violence?

Learning how to identify cases of rape

With high walls and no roof, the health clinic in Macharote looks like a mouth open to the sky above. The walls are damp, filled with mould and rot.

“When the water withdrew, it washed away all the medicines, tools and equipment needed at the health clinic,” NORCAP expert Sabine Nana says. She works as a Sexual and Reproductive Health Specialist with the United Nations Populations Fund (UNFPA) in Beira - the city hardest hit by cyclone Idai.

In the weeks following the disaster, Nana visited several clinics and set-up temporary tents to ensure that support for sexual and reproductive health was available to local communities. She prepared the tents with medicine and equipment and made sure nurses who had their homes damaged, had a place to stay.  Recruiting nurses and training them in midwifery were also among the tasks.

“For example, we can use a session on contraception to include information on rape and child marriage. We tell them what support is available, and the risks if they don’t seek medical help in time. We let them know about the reporting structures and how to seek justice for the crimes committed against them.”

Included in the midwife training, Nana ensures the nurses know what signs to look for to identify cases of sexual violence.  This is one of the most important parts of the training and coaching she gives to nurses. In addition, she trains them in psychological and medical support, and where to refer survivors next to proceed with their case.

“Our work does not stop at the health facility; we must ensure the survivors have the support they need when they come home as well. This includes going to the health facility for follow-up treatment, without being stigmatised in the community” she says.

“Sometimes we receive women at the health clinic who have tried abortion at home. They don’t come to see us because of the actual rape, but because they are suffering from complications after an attempted abortion.”

Sabine Nana is concerned. Even though UNFPA have supported several destroyed health clinics, and she herself has trained 32 nurses to work as midwifes, it is not enough. Many clinics still don’t have the expertise or medication needed to support a survivor of sexual violence. And if that’s the case, the survivor might be referred to another health clinic.

By the time she arrives at the right place, it might be too late.

“If a woman has been raped, she has three days to access care to prevent potential HIV, five days to prevent unwanted pregnancy, and in some cases just hours to ensure that life-threatening injuries don’t become fatal,” Sabine Nana says.

Lack of soap and sanitary pads

In the Cura resettlement site in Nhamatanda, NORCAP experts Grace Chirewa and Felicité Molengar stand in front of a group of women. The tent is crowded, many are holding small children, or breastfeeding. They are gathered in a women-friendly space.

Meaning: men are not allowed.

Chirewa and Molengar are experts on gender-based violence and today they are distributing a package of basic items to the women, called dignity kits. Holding up item after item in front of the crowd, - toothbrush, soap, sanitary pads, toothpaste, the women applaud and listen carefully to the instructions.

Those living in resettlement sites lost everything they had and were forced to move during the cyclone. They are now dependent on support to survive. A dignity kit is much needed. However, lacking basic items are not the only protection issues these women face.

“We have had to advocate for distribution of tents,” Grace Chirewa says. “In some sites, women slept outside. That is a protection issue. Women are also at risk of harassment and sexual violence when going to the toilet at night, or fetching water at the pumps,” she continues.

Leading the sub-cluster on gender-based violence in the cyclone response, Chirewa works to have these risks mainstreamed into the overall humanitarian response programme.

“Most of the issues we see are linked to shelter or wash, so we have had to advocate to ensure gender-based violence risks are included in their work,” she says.

Although most reports of gender-based violence in Mozambique are linked to violence between two intimate partners, other forms of sexual violence are also present. However, getting people to report such issues is a challenge.

The law in Mozambique states that you are obliged to report if you come across a case of sexual violence. This means if a survivor goes to get treatment, the doctor will have to report the case, even if the survivor does not want to.

“On the one side, this is a good thing, because it means perpetrators can be punished. However, it could be counter-productive. People often feel afraid to seek treatment because either your case will be known, or you could potentially put a doctor in trouble for not reporting,” says Felicité Molengar.

“They might think, if I report, what is there for me?,” Grace Chirewa says.

Three months after the cyclone, many aid agencies are scaling down their humanitarian response, but the work is not over. Addressing the root causes that lead to child marriage, rape and harassment, requires a holistic response across sectors, including everyone involved in the response.

“Government representatives are closely involved in the work we have done, ready to take over when we leave. There is still a lot of work to do,” Grace Chirewa says.

During their mission, the NORCAP experts have worked in collaboration with the local authorities, helping to set up a system to support survivors of gender-based violence.

“We have worked to link services such as the medical facilities, the police, the legal system and psycho-social support, so that when a survivor comes forward, these four services should be available to them. Hopefully, this will make it easier for people to report and for us to give them the care they need”, Chirewa says. 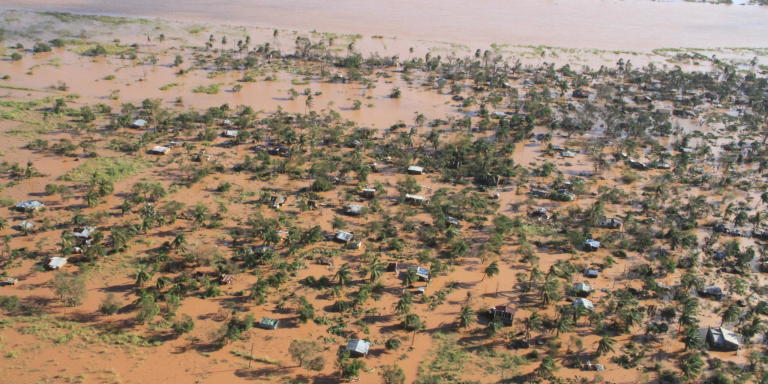 Gearing up for Idai