Rhon Franz Salmon|Published 05. Oct 2018
Bosnia & Herzegovina Expert deployment NORCAP NORDEM Election observation
Citizens of Bosnia and Herzegovina will go to the polls to choose three presidents and members of the country’s lower legislative body on October 7th. With the very survival of the country and regional stability teetering at the brink, the presence of election observers such as NORDEM, has psychological and social importance, according to three experts on the Balkans and elections.

While it is cliched to describe every election as the most important one, for Bosnia and Herzegovina, and its 3 million citizens, this one feels different. The international community has also recognised the urgency of this election and what the results could imply.

NORCAP's expertise on democracy and human rights, NORDEM, aims to do its part, deploying two election observers in advance of the general election. This year’s election marks the 8th in Bosnia’s post-war history and NORDEM has deployed election observers to most of them.

Past observers have reported good overall election conditions, with isolated accounts of technical, procedural and administrative incidents. Nevertheless, given the tension and events leading up to the election, the presence of election observers from NORDEM could never be timelier.

The war, which began in 1992 following the collapse of the mixed Republic of Yugoslavia, ended three years later with the signing of the Dayton Accords in 1995. Bosnia and Herzegovina was born out of this agreement and since then, has continued to hold the country together—at least politically. Bosnia and Herzegovina’s internationally recognised border consists of the Bosnian Serbs’ Republika Srpska (49% of the territory) and the Bosniak/Croat Federation, which holds 51% of the territory.

The provisions set forth in the Dayton Accord, outlines how delicate of a balance it was to create the multi-ethnic nation. The upper house, known as House of Peoples, has 15 seats divided into thirds for each of the three ethnic groups. The same was done for the lower house, House of Representatives, which divided all 42 (now 58) seats into thirds.

Lastly is the presidency: one from each ethnic group. Despite the success of the Dayton Accord in ending a war that left an estimated 100,000 dead, it has limitations that strike at the heart of individual rights.

"Election observers show Bosnians that their progress with building democratic institutions is something that the international community cares about and will try to help with."
Dr. Gentian Zyberi, Norwegian Centre for Human Rights

Jasna Jozelic is an adviser at the Norwegian Centre for Human Rights, and published author with an expertise in the politics of religion, nationalism and identity. She believes the provision of rights set forth in the Dayton Accords play a significant role in issue of identity in this year’s election.

Bosnia’s Constitution Court ruled partially in favour of a case brought by a Croat politician living in a majority-Bosniak region, based on the argument of equal representation. The court also struck down parts of the election law and lawmakers have ignored instructions to pass election reform laws.

The court later struck down a similar case brought by a Serb presidential candidate who lived in a region not dominated by fellow Bosnian Serbs. Inconsistent high court rulings and politicians ignoring the rule of law, have left many Bosnians, sceptical of politics, open to the lure of nationalism and deception.

Bosnian Serb leader, President Milorad Dodik, in a recent interview confirmed his wishes to take Republika Srpska out of Bosnia’s current entity. Dodik, after describing the benefits of further integration into Europe as “naïve”, sees Brexit as a model for Republika Srpska’s own departure.

“The main issue is the increased level of nationalism,” said Jozelic with a look of concern. “If people vote for nationalism, it means that people will be voting to split Bosnia by ethnical lines.”

Jozelic remembers first-hand what a divided Bosnia looked like. She fled the war and arrived in Norway as a refugee at age 23, but remains up-to-date with developments in the country. She also highlighted issues that NORDEM’s election observers may learn during the upcoming election.

The Central Election Commission has issued a warning with regards to voter registration fraud, and it is plausible that Bosnians might question the legitimacy of the election results.

“I think that NORDEM election observers should be mindful of this,” cautioned Jozelic.

Considering challenges posed to the instruments of governance and the tone of cynicism taking root in advance of October 7th, Bosnians need a reason to believe that their voices are being heard and that they, too, have a say in their country’s progress.

Election observation in Bosnia is about more than identifying and reporting irregularities. Dr. Gentian Zyberi, a Professor and Head of Department for the Norwegian Centre for Human Rights, describes the benefit of election observers as one that includes a psychological and social perspective.

“Election observers show Bosnians that their progress with building democratic institutions is something that the international community cares about and will try to help with,” he said.

“Many Bosnians are already disappointed and disillusioned when it comes to politics. If the elections are seen not to be fair or legitimate I am afraid Bosnians will lose hope that things can improve,” she said.

This election puts identity, nationalism, truth, the rule of law and how Bosnians perceive those serving in institutions meant to serve their interests on a collision course. Though election observation is a small piece of the puzzle, observers will, no doubt, play a vital part in shaping not only perception, but also reality. 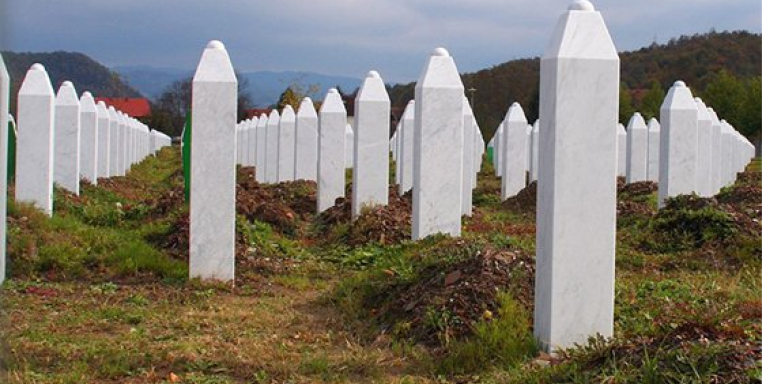 20 years since the Srebrenica massacre

20 years has passed since 8,000 Bosnian Muslims (nobody knows the exact number) were murdered in and around the city of Srebrenica. The Srebrenica massacre has been designated as the largest genocide in European postwar history.