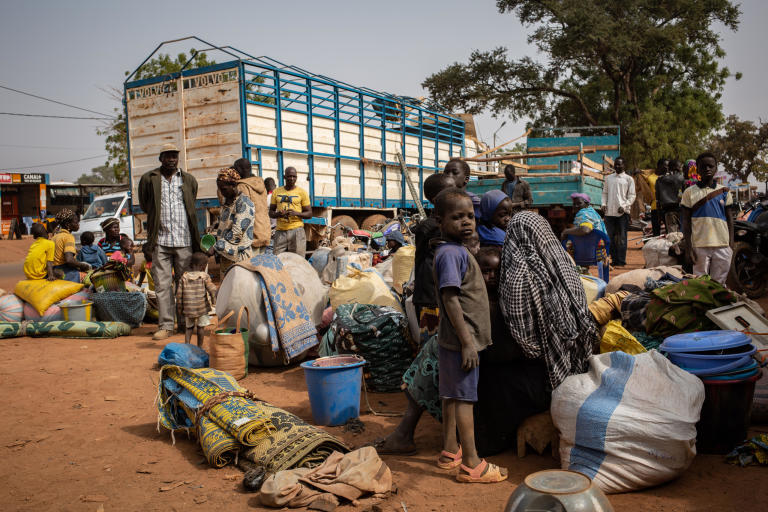 
Five things you should know about the crisis in Burkina Faso

Itunu Kuku Published 29. Jan 2020
Burkina Faso Education Livelihoods and food security Internal displacement
Read caption Newly displaced people waiting at the side of the road after fleeing attacks in Barsalogho, Burkina Faso. Photo: Tom Peyre-Costa/NRC
“We don’t have any food, we don’t have a roof over our head, we have nothing at all. We are asking for assistance.” Fatoumata, 67, is one of over half a million people displaced by violence in Burkina Faso during the past year.

On Monday 20 January 2020, armed men opened fire on a market in Nagraogo, in the Centre-Nord region of Burkina Faso, killing 36 people. Earlier in the month, on 4 January, 14 people were killed when a school bus was hit by a roadside bomb attack. The bus was carrying children back home from a school break.

These two deadly incidents which have taken place in the past few weeks help to illustrate the rapidly deteriorating security situation in Burkina Faso. However, the resulting humanitarian crisis in the country remains largely unacknowledged and unaddressed.

Families are being forced to leave their villages at a moment’s notice, abandoning all their belongings as they seek safety in distant towns. They are in urgent need of assistance in the form of food, water, shelter and education.  Here are five things you should know about Burkina Faso’s growing humanitarian crisis.

This 1000% increase in the space of a single year makes the crisis in Burkina Faso the world’s fastest-growing displacement crisis. The figure is expected to spike to a staggering 900,000 by April 2020.

While an increase in violence and insecurity has also been noted in neighbouring Mali and Niger, the number of displaced people in Burkina Faso represents more than the total in Mali (204,015) and Niger (136,554) combined.

2. People are going hungry due to lack of food

Due to the insecurity in the country, affected areas have seen a decrease of between 20 and 70 per cent in agricultural activities.

The World Food Programme estimates that 1.2 million people (out of a population of 19 million) are currently in need of food assistance in Burkina Faso. This figure is expected to increase to 1.8 million when the lean season arrives in June.

3. Health centres are shutting down

At a time when health centres and hospitals are needed more than ever, as of December 2019, 95 health centres were closed and 135 were functioning only at minimum capacity. The closures are jeopardising access to basic health care for nearly 1.2 million people.

Insecurity has also had an adverse effect on the country’s education system. According to UNICEF figures, as of June 2019, 2,087 schools had been closed, leaving 330,000 children with no or limited access to education.

This fact is worrying not only because of the potential impact on children’s development, but also because out-of-school youth are at a higher risk of being sexually exploited and being recruited by armed groups.

5. The humanitarian response is slow

Despite the scale of the crisis, the humanitarian response been hampered by a lack of funding. In 2019, out of the estimated USD 187 million needed, only USD 89 million was raised. This meant that humanitarian organisations were unable to reach many of the communities affected. This year, due to the fast-growing nature of the crisis, the United Nations estimates that USD 295 million will be needed.

The Norwegian Refugee Council (NRC) is present in Burkina Faso, providing shelter assistance in displacement camps. We are also providing emergency education assistance by rehabilitating classrooms so that students can go to school safely.

However, more resources are required to meet the vast needs. Donors must step up their efforts to address this humanitarian emergency.