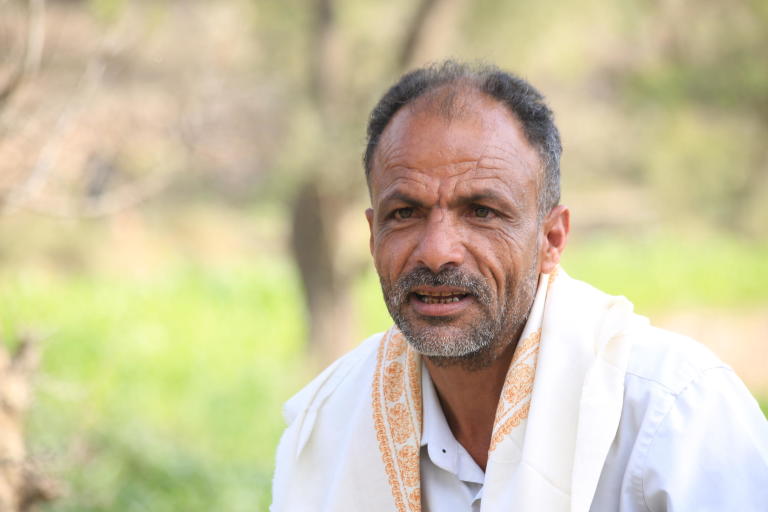 
Sowing the seeds of self-sufficiency

By Nasser Abdulkareem Published 12. Jun 2021
Yemen Livelihoods and food security
Read caption Abdullah Qaid, 45, had been working as a teacher for 28 years, but because of the increase in food prices, he has turned to farming. Photo: Khalid Al-Banna/NRC
Hunger levels are dangerously high in Yemen. But one group of farmers has found a way to feed their families and make a profit from growing vegetables.

Abdullah spent 28 years working as a teacher in Taiz, a city in south-west Yemen. His salary used to be enough to support his eight family members. But that was before the war escalated in 2015.

Over the past six years, the Yemeni currency (the Rial) has declined in value. Teachers like Adbullah went without their salaries for more than a year. The financial situation led to a huge spike in food prices.

“Some families used to mix flour with animal feed and eat it because they couldn’t afford the price of pure flour,” Abdullah recalls.

Abdullah inherited land from his father. He used to grow corn on it to supplement his teaching work, but this wasn’t enough to provide for his family.

Now, with the support of the Yemen Humanitarian Fund (YHF), the Norwegian Refugee Council (NRC) is helping 1,000 farming families like Abdullah’s in Jabal Habashi district, Taiz, to grow vegetables.

The families are provided with seeds, farming tools, training, and cash to pay for ploughing and access to water. Farmers then sell part of their harvests, including tomatoes, zucchini, okra, and onions, at the village market. “Now, families have money to buy what they need,” says Abdullah.

“Our life is better now we are farming”

Rashidah Abdu is another of the farmers who received assistance. She is the sole breadwinner for her five children, the eldest of whom is only 14 years old. A friend allowed her to use part of his land and she started growing vegetables.

“Before, we struggled to get enough food and other basics but now everything is within reach,” says Rashidah. “Our life is better now we are farming. Instead of working for others, we work on our crops and get enough money.”

Rashidah’s can now provide her children with books, materials and clothes for school.

Farming all year round

Badreyah Hussein, another farmer in Taiz’s Jabal Habashi district, had no experience of farming in the winter. She said she used to plant corn in the summer and leave her land fallow in winter. She had never planted vegetables before.

“NRC trained us in vegetable farming, and we liked the idea,” says Badreyah. “They provided us with seeds, tools, money, and we started to plant vegetables for the first time.”

“Before, from the harvest we got, we kept seeds for the coming season. There wasn’t enough to eat or sell. That has been our life since I was a child. Now, things have changed for the better,” she says.

Nearly 16 million people – more than half of Yemen’s population – are facing dangerous levels of hunger and rely on humanitarian aid to survive. Food prices in Yemen have soared, pushing prices out of reach for millions of people.

Although only a small proportion of Yemen’s food is produced domestically, nearly two-thirds of Yemenis make a living from agriculture. Projects like this increase access to food for vulnerable people, and also help them earn an income.

More support is needed for sustainable livelihoods in Yemen so that people do not have to rely on aid to survive and can ensure their families do not go hungry.