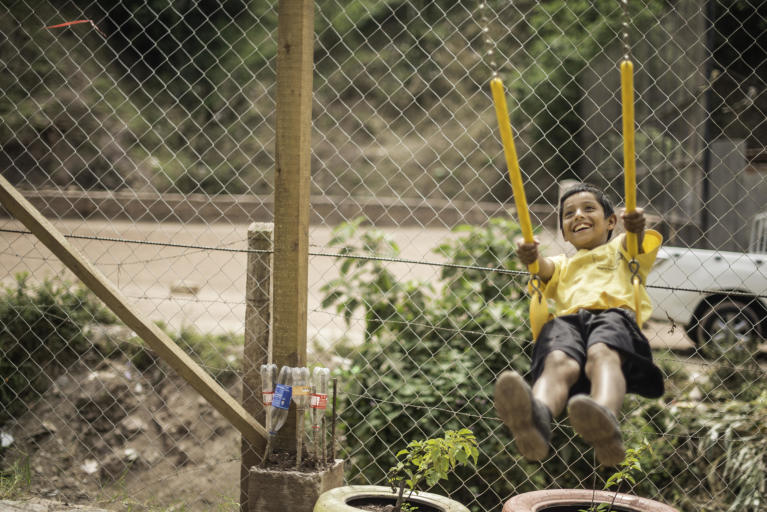 
Working together to end violence

Kristine Grønhaug and photo: Ana Karina Delgado Published 01. Sep 2018 Edited 31. Aug 2018
Honduras Children
What do you do as a parent: Do you force your children to stay inside all the time? Do you let them play outside, at the risk them being shot? The people living in the poorest neighbourhoods of Honduras confront these problematic choices regularly as they navigate the unceasing violence that marks their daily lives.

In Honduras, as in many other countries in Central America, the population is ravaged by the scourge of criminal gangs controlling the neighbourhoods. It's not easy being a child in these areas.

There is one neighbourhood in the Honduran capital of Tegucigalpa where around three thousand people live, including about eight hundred children. The neighbourhood is controlled by several different gangs, split along turf boundaries. Gang members there commit widespread acts of violence and assault, including kidnappings, murder, extortion, as well as weapon sales and human trafficking.

The borders between the different gangs' territories are invisible. The children have to learn early on where these borders go. Crossing one or more borders to get to school or to visit a friend can be dangerous, and children have been harassed, beaten, or worse.

There are few after-school activities available to these young people, if any. The gangs decide where they can, and cannot, hang out. In this neighbourhood, there is a field covered in gravel that would have been great for football, but everyone knows that the local gang has forbidden people from using it after two o'clock in the afternoon.

Our team in Honduras understood this, and wanted to do something about it.

Children suffer the most

When you have lived in a violent society your entire life, it is easy to think that violence is normal and just something to be endured. You become acclimatized to it. The first thing we did, was to tell people that this is not the case.

We went into the community, and we asked if we should all cooperate to create better living conditions for the children. Everyone agreed that the children are the ones who suffer the most, and that they needed a safe playground. This, according to RCN education adviser Sioni Sanchez, was the key. "We then put together a working group. In addition to our own contribution to the work, we received contributions from other humanitarian organisations. The 25 volunteers who helped build the playground went to work well aware of the importance of what they were doing," she continues.

The results were a success story. The new playground is located on a sloping hill covered with grass and plants. It contains a large, wooden castle, two slides, and see-saws. The volunteers collected seven hundred car tires, which were painted in different colours and placed around the area. Now, they are used for stairs and for climbing. In some of the tires, the volunteers have planted flowers.

Across from the playground there is a church. From the church, the parish distributes one free meal to the kids each day. After school, and after they have eaten, the children are allowed to use the playground. Once the gate opens, they run into the green park to play. Four hundred children now play in the park every week.

“I was a part of the entire process, from the first meeting we organised up until today,” says priest Noel Aragón. His church donated the plot of land to the project. “We live in a very vulnerable neighbourhood, troubled by gangs, drugs and violence. That's why I wanted to be a part of this”.

We asked him why he though the gangs, with their wanton ways of violence and lawlessness, allowed for this sanctuary for children to be built. “We know that some of the children who eat at the church have parents in the gangs. That's precisely why we thought it would be smart to build the playground in this exact spot”, he replied, smiling.

Photos from the playground: